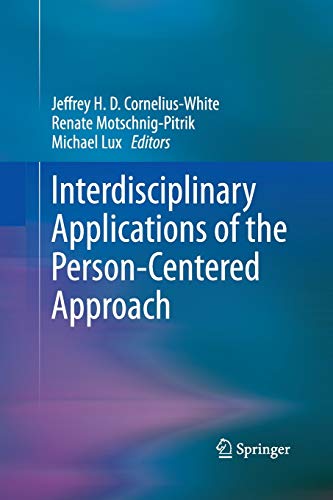 This book examines the scientific contribution and increasing relevance of the Person-Centered Approach (PCA) in psychotherapy.

This book examines the scientific contribution and increasing relevance of the Person-Centered Approach (PCA) in psychotherapy. The direction taken in the book is to provide readers with a multidisciplinary and multi-perspective view as well as practical applications. Beyond the more conventional psychotherapy applications (client-centered, experimental, emotion-focused, child-centered, motivational interviewing, existential, filial, etc.) others have evolved including peace and conflict resolution work, encounter and T-groups, nonviolent communication, parent effectiveness training, person-centered planning for people with disabilities, relationship enhancement methods, learner-centered education, technology-enhanced learning environments, human relations leadership training, etc. Simultaneously, scientific disciplines were influenced by this perspective in less obvious ways. Hence, the major contribution of this book is to identify and characterize the key bridges-so far only partly recognized- between the PCA and several other disciplines. Based on the results of the bridge-building endeavor, the editors will propose an initial formulation of the PCA as a meta-theory. It is intended as a generic framework to solve complex, social problems and to stimulate further research and development concerning the human species in relationship to its environment.

Jeffrey H. D. Cornelius-White, Psy.D., LPC is Professor of Counseling at Missouri State University and doctoral faculty at the University of Missouri-Columbia. He is former editor of The Person-Centered Journal and former chair of the World Association for Person-Centered and Experiential Psychotherapy and Counseling. He has published more than 75 works, including Learner-Centered Instruction (Sage, 2010 with Adam Harbaugh), Facilitating Young People's Development (PCCS, 2008 with Michael Behr), and Carl Rogers: The China Diary (PCCS, 2012). Jef studied at the Chicago Counseling Center and the Pre-Therapy Institute and is a graduate of Argosy University-Chicago. He enjoys cycling, volleyball, his friends and family.

Renate Motschnig-Pitrik, born in Ostrava, Czech Republic, is a professor of computer science and head of the Computer Science Didactics and Learning Research Center at the University of Vienna, Austria. Renate held positions at the RWTH Aachen in Germany, the University of Toronto, Canada, and teaches and cooperates with the Masaryk University in Brno, Czech Republic. She participated in encounter groups and several events based on the Person-Centered Approach. She is deeply interested in the multiple ways in which mutual understanding and whole-person learning happen. She is an author/co-author of more than 130 scientific articles, one book, and is determined to foster a style in education that is based on person-centered attitudes, our co-actualizing potential, and thoughtful support by web-based technology. She appreciates synergies between presence and distance, and a multitude of (scientific) disciplines and cultures.

Michael Lux, born in Stuttgart, Germany, has Master degrees in psychology and gerontology. He is a certified person-centered psychotherapist and works as a psychotherapist and neuropsychologist in the Neurological Rehabilitation Center Quellenhof in Bad Wildbad, Germany. Over the past few years, he has been intensively engaged with linkages between the Person-Centered Approach (PCA) and neuroscience. As a result he developed the model of a neuroscientifically based person-centered psychotherapy, which he described in a book and in scientific articles. Furthermore, he gives lectures and workshops on the neuroscientific bases of the PCA at conferences and training institutes.