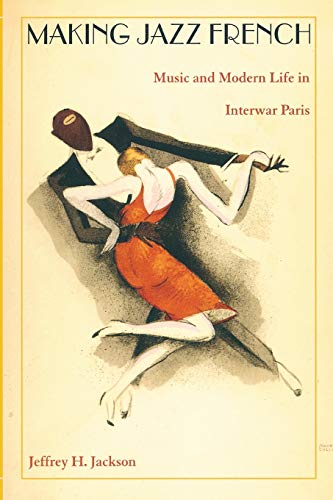 Used Price
$38.99
inc. GST
Free Shipping in Australia
Between the world wars, Paris welcomed not only a number of glamorous American expatriates including Jospehine Baker and F Scott Fitzgerald, but also a dynamic musical style emerging in the United States: jazz. This title examines how and why jazz became so widely performed in Paris in the 1920s and 1930s and also why it was so controversial.
Reviews:
Trustpilot
Like New Well Read

Between the world wars, Paris welcomed not only a number of glamorous American expatriates, including Josephine Baker and F. Scott Fitzgerald, but also a dynamic musical style emerging in the United States: jazz. Roaring through cabarets, music halls, and dance clubs, the upbeat, syncopated rhythms of jazz soon added to the allure of Paris as a center of international nightlife and cutting-edge modern culture. In Making Jazz French, Jeffrey H. Jackson examines not only how and why jazz became so widely performed in Paris during the 1920s and 1930s but also why it was so controversial.

Drawing on memoirs, press accounts, and cultural criticism, Jackson uses the history of jazz in Paris to illuminate the challenges confounding French national identity during the interwar years. As he explains, many French people initially regarded jazz as alien because of its associations with America and Africa. Some reveled in its explosive energy and the exoticism of its racial connotations, while others saw it as a dangerous reversal of France's most cherished notions of "civilization." At the same time, many French musicians, though not threatened by jazz as a musical style, feared their jobs would vanish with the arrival of American performers. By the 1930s, however, a core group of French fans, critics, and musicians had incorporated jazz into the French entertainment tradition. Today it is an integral part of Parisian musical performance. In showing how jazz became French, Jackson reveals some of the ways a musical form created in the United States became an international phenomenon and acquired new meanings unique to the places where it was heard and performed.

"A history that reads like a good story, this new book by Jeffrey H. Jackson illumines the multiple reactions to jazz in France, ranging from enthusiasm and fascination to fear and disgust. It also vividly recaptures the broad cultural context and above all succeeds in demonstrating the importance of jazz for the ongoing debate about French
national identity and modernity."-Charles Rearick, author of The French in Love and War: Popular Culture in the Era of the World Wars
"Jeffrey H. Jackson's work is unique in providing a more detailed history of jazz in interwar France than anything yet in print (certainly in English). Jackson offers a new, rather unusual perspective, concentrating on the ways jazz was integrated into national practices and traditions, rather than portraying it as simply a foreign intrusion into national life. This is a very rich approach to cultural history, offering a far more complex and nuanced understanding of the process of trans-Atlantic cultural interchange than top-down perspectives."-Tyler Stovall, coeditor of The Color of Liberty: Histories of Race in France
"This lively and innovative book views jazz through the prism of contemporary ideas about 'blackness' and the Americanization of Europe's economy and culture to explore the relationship between culture, race, and national identity in twentieth-century France. Jeffrey H. Jackson reveals a complex interplay of cultural and social forces that stretches from across the Atlantic to the trenches of World War I to the colonies of la plus grande France."-Alice Conklin, author of A Mission to Civilize: The Republican Idea of Empire in France and West Africa, 1895-1930
(Starred Review) "This is an outstanding little book-a highly readable history of jazz in interwar Paris and a brilliant case study of French cosmopolitanism. . . . Entertaining, informative, authoritative, and broad in scope, Jackson's study will appeal to readers of varied interests. . . ." * Library Journal *
"Jackson makes an important contribution to historical studies in complicating understandings of French cultural nationalism between two world wars. . . . Compelling." -- Jody Blake * American Historical Review *
"Jackson's interesting . . . work traces how a new 'cabaret culture' replaced big dancehalls, examines the effect recording technology had on the spread of jazz, and shows how, by the end of the 30s, the indefatigable French had managed to incorporate jazz into a new idea of a national cultural tradition."
-- Steven Poole * The Guardian *

GOR010758122
Making Jazz French: Music and Modern Life in Interwar Paris by Jeffrey H. Jackson
Jeffrey H. Jackson
American Encounters/Global Interactions
Used - Like New
Paperback
Duke University Press
2003-08-05
280
0822331241
9780822331247
N/A
Book picture is for illustrative purposes only, actual binding, cover or edition may vary.
The book has been read, but looks new. The book cover has no visible wear, and the dust jacket is included if applicable. No missing or damaged pages, no tears, possible very minimal creasing, no underlining or highlighting of text, and no writing in the margins.