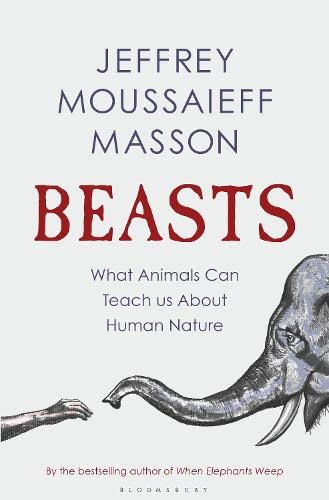 Orcas (or killer whales) are one of the planet's supreme predators. Alongside humans, they have the most complex brains to be found in nature. But while one of these two species has killed 200 million members of its own kind in the twentieth century alone, the other has killed none. This is where Jeffrey Masson's fascinating new book begins: there is something different about humans. Masson has shown us that animals can teach us much about our own emotions - about love (dogs), contentment (cats) and grief (elephants). But they have much to teach us about the negative emotions such as anger and aggression as well, and in unexpected ways. In Beasts he demonstrates that the violence we perceive in the 'wild' is mostly a matter of projection. We link the basest human behaviour to animals, to 'beasts', and claim the high ground for our species. We are least 'human', we think, when we succumb to our primitive, animal instincts. In fact, nothing could be further from the truth. Animal predators kill to survive, but there is nothing in the annals of animal aggression remotely equivalent to the violence mankind has inflicted upon itself. Humans, and humans in our modern industrialised world in particular, are the most violent species in existence. We lack what all other animals have: a check on aggression that serves the species rather than destroys it. And it is here that animals have something vitally important to teach us about ourselves.

Most of us see humans as morally superior to animals in every respect, while describing our bad behaviour (war, torture, enslavement, extermination) as 'brutish, animalistic, inhuman, subhuman' - as if it reflected 'animal' origins. But Jeffrey Masson has made me aware that we in fact are the only animals that exhibit this behaviour, and do so frequently and massively. A groundbreaking book * Daniel Ellsberg *
Stand yourself in front of a full-length mirror. You are looking at the more dangerous, aggressive, murderous species on Earth. You may well ask: 'Who? Me?' This book demonstrates in appalling detail that yes, it's us all right ... Will we change in time to save the world's animal population, including ourselves? These are the questions that make this an important, if gloom laden book * Daily Mail *
A compelling look at what animals at the top of the food chain can teach us about anger, aggression and the history of human violence * BBC Wildlife *
Masson presents complex psychological and philosophical aspects of the way we perceive and relate to animals in an accessible way ... A powerful reflection on an issue with far-reaching consequences * The Lady *
The word "beast" is one with a long and charged history. As we discover more and more about the emotional and cognitive capabilities of animals, the term seems less and less apropos. Masson delves into who the "beasts" really are in this captivating read * thedodo.com *

Jeffrey Moussaieff Masson is a former psychoanalyst who was, briefly, director of the Freud Archives. He has taught the history of psychoanalysis and journalistic ethics at the University of Toronto and the University of Michigan. At present he is an honorary research associate in the department of sociology at the University of Auckland, in New Zealand. He is the author of numerous books, most recently Dogs Make Us Human, and bestselling books on animal emotions, including Dogs Never Lie About Love, When Elephants Weep, and The Dog Who Couldn't Stop Loving. @jeffreymmasson www.jeffreymasson.com

GOR005987790
Beasts by Jeffrey Moussaieff Masson
Jeffrey Moussaieff Masson
Used - Very Good
Hardback
Bloomsbury Publishing PLC
2014-03-13
224
1408818760
9781408818763
N/A
Book picture is for illustrative purposes only, actual binding, cover or edition may vary.
This is a used book - there is no escaping the fact it has been read by someone else and it will show signs of wear and previous use. Overall we expect it to be in very good condition, but if you are not entirely satisfied please get in touch with us.