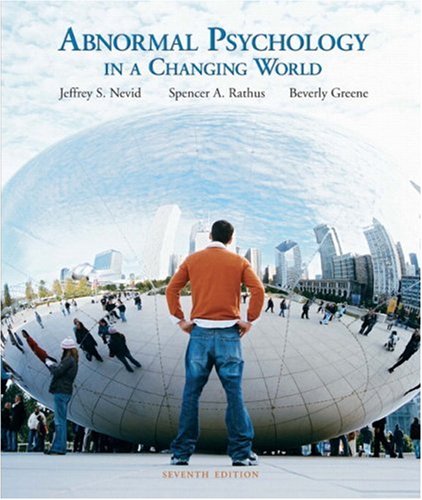 Out of Stock
$63.99
inc. GST
A mainstream text with a contemporary twist, this introduction is designed to make the material in this field accessible to students in a changing world. A fully-integrated approach features a clear writing style and coverage of a diverse range of issues.
Very Good
Only 0 left

For courses in Abnormal Psychology and Psychopathology.

Psychology in a Changing World puts a human face on the study of Abnormal Psychology.

Within the field of abnormal psychology, research developments continue to sharpen the understanding of abnormal behavior. In Abnormal Psychology in a Changing World, Nevid, Rathus, and Greene endeavor to bring these advances to students in a way that both stimulates interest and makes complex material understandable. More importantly, however, they recognize there is a basic human dimension to the study of abnormal psychology. The approach the authors take is to help students enter the world of people suffering from the range of disorders they encounter in the text. By including many illustrative case examples drawn from the authors' own case experiences and those of other practitioners, an accompanying video casebook of interviews with real people diagnosed with different disorders, and a landmark pedagogical feature of first-person narratives from people struggling with psychological disorders, Abnormal Psychology in a Changing World 7e helps put a human face on the study of abnormal psychology.

Dr. Nevid is also author of the book, Choices: Sex in the Age of STDs and the introductory psychology text, Psychology: Concepts and Applications, as well as several other college texts in the fields of psychology and health that he coauthored with Spencer A. Rathus. Dr. Nevid has also been involved in conducting a program of pedagogical research focusing on helping students become more effective learners.

Spencer A. Rathus received his PhD from the University at Albany. He is on the faculty at the New York University School of Continuing and Professional Studies. His areas of interest include psychological assessment, cognitive behavior therapy, and deviant behavior. He is the originator of the Rathus Assertiveness Schedule, which has become a Citation Classic. He has authored several books, including Psychology in the New Millennium, Essentials of Psychology, and The World of Children. He co-authored Making the Most of College with Lois Fichner-Rathus; AIDS: What Every Student Needs To Know with Susan Boughn; Behavior Therapy, Psychology and the Challenges of Life, Your Health and Health in the New Millennium with Jeffrey S. Nevid; and Human Sexuality in a World of Diversity with Jeffrey S. Nevid and Lois Fichner-Rathus. His professional activities include service on the American Psychological Association Task Force on Diversity Issues at the Precollege and Undergraduate Levels of Education in Psychology, and on the Advisory Panel, American Psychological Association, Board of Educational Affairs (BEA) Task Force on Undergraduate Psychology Major Competencies.

Beverly A. Greene is Professor of Psychology at St. John's University and is a Fellow of seven divisions of the American Psychological Association, as well as a Fellow of the American Orthopsychiatric Association and the Academy of Clinical Psychology. She holds a Diplomate in Clinical Psychology and serves on the editorial boards of numerous scholarly journals. She received her Ph.D. in Clinical Psychology from Adelphi University and worked in public mental health for over a decade. She was founding co-editor of the APA Society for the Study of Lesbian, Gay and Bisexual Issues series, Psychological Perspectives on Lesbian, Gay and Bisexual Issues. She is also coauthor of the recent book, What Therapists Don't Talk About And Why: Understanding Taboos that Hurt Ourselves and Our Clients, and has more than 80 professional publications that are the subject of nine national awards. Dr. Greene was recipient of the APA 2003 Committee On Women In Psychology Distinguished Leadership Award, 1996 Outstanding Achievement Award from the APA Committee on Lesbian, Gay and Bisexual Concerns, the 2004 Distinguished Career Contributions to Ethnic Minority Research Award from the APA Society for the Study of Ethnic Minority Issues, the 2000 Heritage Award from the APA Society for the Psychology of Women, the 2004 Award for Distinguished Senior Career Contributions to Ethnic Minority Research (APA Division 45), and the 2005 Stanley Sue Award for Distinguished Professional Contributions to Diversity in Clinical Psychology (APA Division 12). Her co-edited book, Psychotherapy with African American Women: Innovations in Psychodynamic Perspectives and Practice, was also honored with the Association for Women in Psychology's 2001 Distinguished Publication Award. In 2006 she was the recipient of the Janet Helms Award for Scholarship and Mentoring from the Teacher's College, Columbia University Cross Cultural Roundtable, and of the 2006 Florence Halpern Award for Distinguished Professional Contributions to Clinical Psychology (Div. 12 APA). She is an elected representative to the APA Council and member at large of the Women's and Public Interest Caucuses of the Council.

Chapter 1: Introduction and Methods of Research

Chapter 12: Schizophrenia and Other Psychotic Disorders

Chapter 16: Abnormal Psychology and the Law

"I" Feature first-person narratives include:

GOR005875519
Abnormal Psychology in a Changing World, Books a la Carte Plus MyPsychLab Pegasus by Jeffrey S. Nevid
Jeffrey S. Nevid
Used - Very Good
Hardback
Pearson Education (US)
2007-11-12
648
0135128978
9780135128978
N/A
Book picture is for illustrative purposes only, actual binding, cover or edition may vary.
This is a used book - there is no escaping the fact it has been read by someone else and it will show signs of wear and previous use. Overall we expect it to be in very good condition, but if you are not entirely satisfied please get in touch with us.