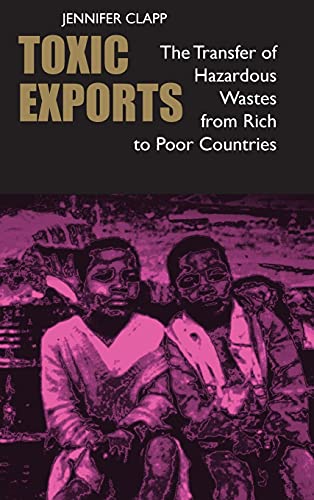 Environmentalists and the governments of developing countries have lobbied intensively to halt hazardous transfers from Northern industrialized nations to the Third World, but the practice continues. Jennifer Clapp addresses this alarming problem.

Toxic Exports: The Transfer of Hazardous Wastes from Rich to Poor Countries by Jennifer Clapp

In recent years, international trade in toxic waste and hazardous technologies by firms in rich industrialized countries has emerged as a routine practice. Many poor countries have accepted these deadly imports but are ill equipped to manage the materials safely. For more than a decade, environmentalists and the governments of developing countries have lobbied intensively and generated public outcry in an attempt to halt hazardous transfers from Northern industrialized nations to the Third World, but the practice continues. In her insightful and important book, Jennifer Clapp addresses this alarming problem.

Clapp describes the responses of those engaged in hazard transfer to international regulations, and in particular to the 1989 adoption of the Basel Convention. She pinpoints a key weakness of the regulations-because hazard transfer is dynamic, efforts to stop one form of toxic export prompt new forms to emerge. For instance, laws intended to ban the disposal of toxic wastes in the Third World led corporations to ship these byproducts to poor countries for "recycling." And, Clapp warns, current efforts to prohibit this "recycling movement" may accelerate a new business endeavor: the relocation to poor countries of entire industries that generate toxic wastes.

Clapp concludes that the dynamic nature of hazard transfer results from increasingly fluid global trade and investment relations in the context of a highly unequal world, and from the leading role played by multinational corporations and environmental NGOs. Governments, she maintains, have for too long failed to capture the initiative and have instead only reacted to these opposing forces.

"Jennifer Clapp's Toxic Exports is the definitive scholarly work on this subject. Clapp provides an engaging account of waste export and hazardous technology transfer problems and an accessible analysis of the various international conventions and amendments that were developed to address these concerns. Clapp is persuasive in her writing because she presents the perspective of all the major stakeholders in this drama: governments, environmental NGOs, and industry.... This study makes a significant contribution to the literature on nonstate actors in international relations."

"This provocative and compelling study of hazardous waste transfers from developed (OECD) to developing countries sheds new light on the 'tragedy of the commons' problem.... The solution to the problem, Clapp concludes, is strengthening the international regime. In the final chapter, she discusses ways of accomplishing this goal. She raises important questions, but, lacking archival material from corporations and their representatives, Toxic Exports is more suggestive than definitive concerning cooperate behavior. Clapp, for instance, too easily dismisses industry arguments that the ban on waste recycling would harm the economies of developing countries and undermine the international trade regime. She also argues against the liberal notion that economic growth and environmental protection go hand-in-hand."

"The book's most important contribution lies in its examination of the movement not only of hazardous wastes but also of the industries that generate them.... More analytical progress would be made if hazardous waste analysts, who have tended to examine either the international or the domestic policy arenas but not both, were, like Clapp, to focus more on the interrelationships between the two."

"Clapp examines the transfer of hazardous wastes and technologies from rich to poor countries, focusing on the sources that contribute to that transfer, as well as the political responses to it."

"That the economy and many environmental problems are global is incontestable. Illustrating and documenting that reality, Clapp details the story of hazardous waste and toxic technology transfer and the complex history of international efforts to curtail and eliminate it. With so many stakeholders... the story demonstrates that solving environmental problems is a far more extensive task than many realize. Particularly noteworthy is Clapp's demonstration of the dynamism involved in toxic transfers."

"The book does a very good job covering the issue of the trade in hazardous waste, a key issue in global environmental justice. There is a wealth of information in the book and an explicit tying of hazardous waste transfers to global capitalism is a key point.... This book will be of interest to those working in the field of environmental justice and international political economy and is to be recommended."

Jennifer Clapp is CIGI Chair in International Governance and Professor, Faculty of Environmental Studies, University of Waterloo. She is the author of Adjustment and Agriculture in Africa: Farmers, the State, and the World Bank in Guinea and the coauthor of Paths to a Green World: The Political Economy of the Global Environment.

GOR010204434
Toxic Exports: The Transfer of Hazardous Wastes from Rich to Poor Countries by Jennifer Clapp
Jennifer Clapp
Used - Very Good
Hardback
Cornell University Press
2001-08-08
192
080143887X
9780801438875
N/A
Book picture is for illustrative purposes only, actual binding, cover or edition may vary.
This is a used book - there is no escaping the fact it has been read by someone else and it will show signs of wear and previous use. Overall we expect it to be in very good condition, but if you are not entirely satisfied please get in touch with us.