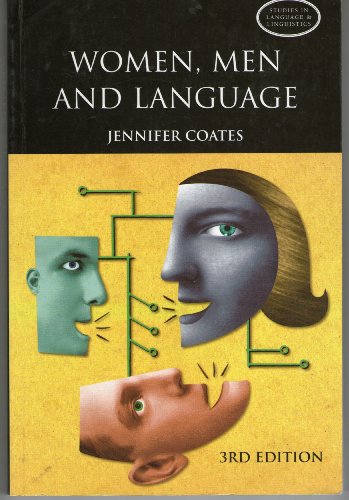 Used Price
$55.99
inc. GST
Free Shipping in Australia
Coates provides an overview both of traditional lore about the linguistic behaviour of women and men and also of recent research findings in sociolinguistics and related subjects.
Reviews:
Trustpilot
Like New

Women, Men and Language: A Sociolinguistic Account of Gender Differences in Language by Jennifer Coates

Women, Men and Language, 3rd Ed provides an up-to-date account of gender differences in language to answer the question: "Do women and men talk differently?"

The book takes the reader from an initial "men talk like this; women talk like that" approach to a more nuanced idea of women and men performing gender in their everyday interactions. It covers a range of sociolinguistic research, looking at grammatical and phonological features a well as at aspects of conversation such as compliments or swearing, and the growing use of the word aEURO~likeaEURO (TM) by younger speakers. Written in a clear and accessible manner, the book explores:

This updated third edition concludes with a new chapter summarising new developments and assessing possible future trends for the area.

'Those who, like me, have used this book in their language and gender courses, will warmly welcome this up-date, which brings both the material surveyed and the perspectives covered into the 21st century. Jennifer Coates' lucid and engaging style continues to make this a very attractive text.'

'Women, Men and Language has served readers since its first publication as an accessible and balanced guide to the literature on gender differences in language. This revised edition extends the book's scope to reflect recent developments in theory and research, while retaining the clarity of earlier versions. Informative, wide-ranging and always readable, the updated text provides 21st century students and their teachers with an invaluable overview of an increasingly complex field. '

Jennifer Coates is Professor of English Language and Linguistics at Roehampton University of Surrey.

GOR010794045
Women, Men and Language: A Sociolinguistic Account of Gender Differences in Language by Jennifer Coates
Jennifer Coates
Studies in Language and Linguistics
Used - Like New
Paperback
Taylor & Francis Ltd
2004-08-12
264
0582771862
9780582771864
N/A
Book picture is for illustrative purposes only, actual binding, cover or edition may vary.
The book has been read, but looks new. The book cover has no visible wear, and the dust jacket is included if applicable. No missing or damaged pages, no tears, possible very minimal creasing, no underlining or highlighting of text, and no writing in the margins.