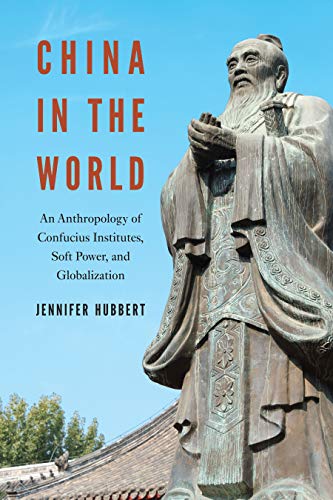 China in the World by Jennifer Hubbert

Confucius Institutes have given rise to contentious public debate in host countries, where they have been both welcomed as a source of educational funding and feared as spy outposts. China in the World turns an anthropological lens on this controversial globalization project to provide fresh insight into China's shifting place in the world.

China in the World: An Anthropology of Confucius Institutes, Soft Power, and Globalization by Jennifer Hubbert

Confucius Institutes, the language and culture programs funded by the Chinese government, have been established in over 1,500 schools worldwide since their debut in 2004. A centerpiece of China's soft power policy, they represent an effort to smooth China's path to superpower status by enhancing its global appeal. Yet Confucius Institutes have given rise to voluble and contentious public debate in host countries, where they have been both welcomed as a source of educational funding and feared as spy outposts, neocolonial incursions, and obstructions to academic freedom. China in the World turns an anthropological lens on this most visible, ubiquitous, and controversial globalization project in an effort to provide fresh insight into China's shifting place in the world.

Author Jennifer Hubbert takes the study of soft power policy into the classroom, offering an anthropological intervention into a subject that has been dominated by the methods and analyses of international relations and political science. She argues that concerns about Confucius Institutes reflect broader debates over globalization and modernity and ultimately about a changing global order. Examining the production of soft power policy in situ allows us to move beyond program intentions to see how Confucius Institutes are actually understood and experienced in day-to-day classroom interactions. By assessing the perspectives of participants and exploring the complex ways in which students, teachers, parents, and program administrators interpret the Confucius Institute curriculum, she highlights significant gaps between China's soft power policy intentions and the effects of those policies in practice.

China in the World brings original, long-term ethnographic research to bear on how representations of and knowledge about China are constructed, consumed, and articulated in encounters between China, the United States, and the Confucius Institute programs themselves. It moves a controversial topic beyond the realm of policy making to examine the mechanisms through which policy is implemented, engaged, and contested by a multitude of stakeholders and actors. It provides new insight into how policy actually works, showing that it takes more than financial wherewithal and official resolve to turn cultural presence into power.
Jennifer Hubbert is chair of the Department of Sociology and Anthropology and associate professor of anthropology and Asian studies at Lewis & Clark College in Portland, Oregon.
NGR9780824878207
9780824878207
0824878205
China in the World: An Anthropology of Confucius Institutes, Soft Power, and Globalization by Jennifer Hubbert
Jennifer Hubbert
New
Hardback
University of Hawai'i Press
2019-03-30
240
N/A
Book picture is for illustrative purposes only, actual binding, cover or edition may vary.
This is a new book - be the first to read this copy. With untouched pages and a perfect binding, your brand new copy is ready to be opened for the first time
Trustpilot