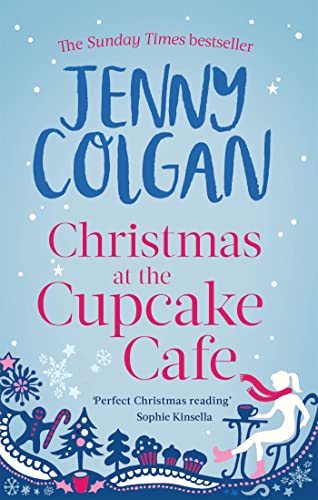 Christmas at the Cupcake Cafe
by Jenny Colgan

In Stock
$13.69
inc. GST
A deliciously warm story of Christmas and cupcakes, by the bestselling author of The Loveliest Chocolate Shop in Paris and Welcome to Rosie Hopkins' Sweetshop of Dreams
Very Good Good
27 in stock

Christmas at the Cupcake Cafe Summary

Christmas at the Cupcake Cafe by Jenny Colgan

Issy Randall, proud owner of the Cupcake Cafe, is in love and couldn't be happier. Her new business is thriving and she is surrounded by close friends, even if her cupcake colleagues Pearl and Caroline aren't quite as upbeat about the upcoming season of snow and merriment. But when her boyfriend Austin is scouted for a possible move to New York, Issy is forced to face up to the prospect of a long-distance romance. And when the Christmas rush at the cafe - with its increased demand for her delectable creations - begins to take its toll, Issy has to decide what she holds most dear.

This December, Issy will have to rely on all her reserves of courage, good nature and cinnamon, to make sure everyone has a merry Christmas, one way or another . . .

Jenny Colgan is the author of numerous bestselling novels, including The Little Shop of Happy Ever After and Summer at Little Beach Street Bakery, which are also published by Sphere. Meet Me at the Cupcake Cafe won the 2012 Melissa Nathan Award for Comedy Romance and was a Sunday Times Top Ten bestseller, as was Welcome to Rosie Hopkins' Sweetshop of Dreams, which won the RNA Romantic Novel of the Year Award 2013. For more about Jenny, visit her website and her Facebook page, or follow her on Twitter: @jennycolgan.

GOR005155786
Christmas at the Cupcake Cafe by Jenny Colgan
Jenny Colgan
Cupcake Cafe
Used - Very Good
Paperback
Little, Brown Book Group
2013-10-08
400
0751550337
9780751550337
Short-listed for RNA Romantic Novel of the Year 2014 (UK)
Book picture is for illustrative purposes only, actual binding, cover or edition may vary.
This is a used book - there is no escaping the fact it has been read by someone else and it will show signs of wear and previous use. Overall we expect it to be in very good condition, but if you are not entirely satisfied please get in touch with us.