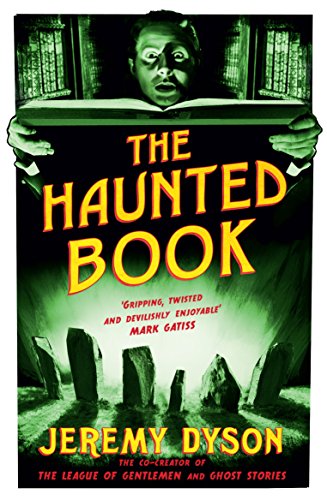 The Haunted Book
by Jeremy Dyson

Used Price
$18.99
inc. GST
Free Shipping in Australia
You will never forget this. No matter how hard you try.
Reviews:
Trustpilot
Like New Very Good

The Haunted Book by Jeremy Dyson

* What unspeakable horror glimpsed in the basement of a private library in West Yorkshire drove a man to madness and an early grave? * What led to an underground echo chamber in a Manchester recording studio being sealed up for good? * What creature walks the endless sands of Lancashire's Fleetwood Bay, and what connects it to an unmanned craft washed ashore in Port Elizabeth, nearly six thousand miles away? In 2009 Jeremy Dyson was contacted by a journalist wanting help bringing together accounts of true life ghost stories from across the British Isles. The Haunted Book chronicles the journey Dyson, formerly a hardened sceptic, went on to uncover the truth behind these tales.

Dyson nestles in the little vacant chink between Roald Dahl and Borges * * Observer * *
Darkly surreal humour . . . seemingly innocent scenarios that veer into deep weirdness * * Daily Express * *
Dyson's one of those rare authors who can write from the heart while still creating something deceptively clever and complex * * Independent of Sunday * *
Gripping, twisted and devilishly enjoyable -- MARK GATISS, * * author of The Vesuvius Club and The Devil in Amber * *
The Haunted Book sets out not merely to entertain, but to embody a creeping menace in the text itself . . . Open if you dare -- Suzi Feay * * The Independent on Sunday * *
Genre defying . . . a boxing of stories within stories that reinforces the folkloric essence of ghost tales while also playing tricks as mind-bending as the image of a ghost caught in a photograph * * Metro * *
Keeps you guessing. The stories themselves are all wonderfully eerie . . . like the bookish version of walking through a haunted house at a fairground * * Savidge Reads Blog * *
A must have for fans of all things spooky -- Joel Watson * * Literature Works * *

Jeremy Dyson is best known as the co-creator of the BAFTA award-winning comedy series The League of Gentlemen. He is the author of three works of fiction. His book The Cranes that Build the Cranes won the Edge Hill Award for short fiction. He is also the co-writer of the hit West End show Ghost Stories, which was optioned for film by the team behind Paranormal Activity. Dyson co-wrote and co-directed the film adaptation, which premiered at the London Film Festival and was released in 2018.

GOR009717263
The Haunted Book by Jeremy Dyson
Jeremy Dyson
Used - Like New
Paperback
Canongate Books Ltd
2013-06-06
352
085786243X
9780857862433
N/A
Book picture is for illustrative purposes only, actual binding, cover or edition may vary.
The book has been read, but looks new. The book cover has no visible wear, and the dust jacket is included if applicable. No missing or damaged pages, no tears, possible very minimal creasing, no underlining or highlighting of text, and no writing in the margins.