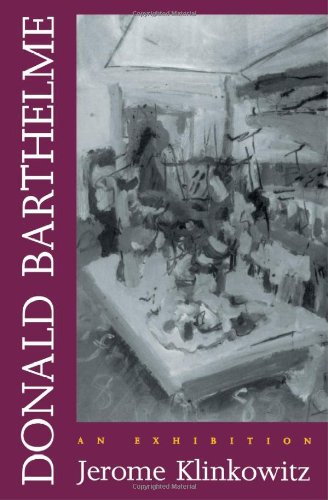 Out of Stock
$45.99
inc. GST
A study of the work of American fiction writer Donald Barthelme, which combines a blend of theory and biography. Emphasis is placed on short stories and the novel "The Dead Father".
Very Good
Only 0 left

Donald Barthelme (1931-1989) is regarded as one of the most imitated and influential American fiction writers since the early 1960s. In Donald Barthelme: An Exhibition, Jerome Klinkowitz presents both an appreciation and a comprehensive examination of the life work of this pathbreaking contemporary writer. A blend of close reading, biography, and theory, this retrospective-informed by Klinkowitz's expert command of postmodern American fiction-contributes significantly to a new understanding of Barthelme's work.
Klinkowitz argues that the central piece in the Barthelme canon, and the key to his artistic method, is his widely acknowledged masterpiece, The Dead Father. In turning to this pivotal work, as well as to Barthelme's short stories and other novels, Klinkowitz explores the way in which Barthelme reinvented the tools of narration, characterization, and thematics at a time when fictive techniques were largely believed to be exhausted.
Klinkowitz, who was one of the first scholars to study Barthelme's work and became its definitive bibliographer, situates Barthelme's life and work within a broad spectrum of influences and affinities. A consideration of developments in painting and sculpture, for example, as well as those of contemporaneous fiction, contribute to Klinkowitz's analysis. This astute reading will provide great insight for readers, writers, and critics of contemporary American fiction seeking explanations and justifications of Barthelme's critical importance in the literature of our times.

GOR010248005
Donald Barthelme: An Exhibition by Jerome Klinkowitz
Jerome Klinkowitz
Used - Very Good
Hardback
Duke University Press
1991-05-22
158
0822311526
9780822311522
N/A
Book picture is for illustrative purposes only, actual binding, cover or edition may vary.
This is a used book - there is no escaping the fact it has been read by someone else and it will show signs of wear and previous use. Overall we expect it to be in very good condition, but if you are not entirely satisfied please get in touch with us.