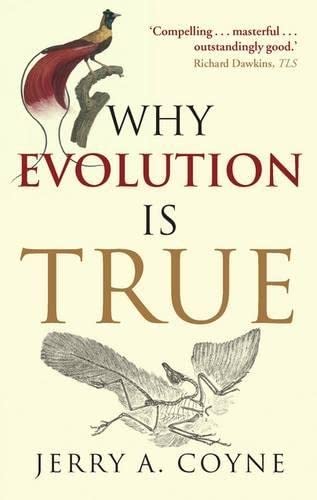 Why Evolution is True
by Jerry A. Coyne

In Stock
$15.99
+10% GST
Why Evolution is True focuses on the hard evidence that proves evolution by natural selection to be a fact. Weaving together and explaining the latest discoveries and ideas from many disparate areas of modern science, this succinct and important book will leave no one with an open mind in any doubt about the truth-and the beauty-of evolution.
Very Good
6 in stock

Why Evolution is True Summary

Why Evolution is True by Jerry A. Coyne

For all the discussion in the media about creationism and 'Intelligent Design', virtually nothing has been said about the evidence in question - the evidence for evolution by natural selection. Yet, as this succinct and important book shows, that evidence is vast, varied, and magnificent, and drawn from many disparate fields of science. The very latest research is uncovering a stream of evidence revealing evolution in action - from the actual observation of a species splitting into two, to new fossil discoveries, to the deciphering of the evidence stored in our genome. Why Evolution is True weaves together the many threads of modern work in genetics, palaeontology, geology, molecular biology, anatomy, and development to demonstrate the 'indelible stamp' of the processes first proposed by Darwin. It is a crisp, lucid, and accessible statement that will leave no one with an open mind in any doubt about the truth of evolution.

Why Evolution is True Reviews

Review from previous edition Coyne is hugely knowledgeable and an excellent writer. * Nature, Vol. 462 *
Review from previous edition One of the very best and most important book on evolution for broad audiences in at least 50 years. * Douglas J. Futuyma, Trends in Ecology and Evolution *
A scholarly, yet delightfully readable account. * Tom Tregenza, Current Biology, Volume 19 *
We must present the evidence, and Jerry Coyne's book does an excellent job of it. * Massimo Pigliucci, Science *
Evolution is true...Coyne displays it for us in a way that no objective reader could fail to find compelling. * Richard Dawkins, TLS *
'Why Evolution is True'is outstandingly good. * Richard Dawkins, TLS *
Coyne's knowledge of evolutionary biology is prodigious, his deployment of it as masterful as his touch is light. * Richard Dawkins, TLS *
His coverage is enviably comprehensive, yet he simultaneously manages to keep the book compact and readable. * Richard Dawkins, TLS *
Coyne's book is just what we needed in this bicentennial year to anchor Darwin where he belongs. * Nigel Hawkes, The Times *
A clear, engaging, accessible explanation of the evidence for evolution. * Massimo Pigliucci, Science *
Excellent volume. * Clive Cookson, Financial Times *
Lucid, thorough and eminently readable, this book is a delight from start to finish. * Doug Johnstone, Scotsman.com *
Coyne gives a clear and engaging overview of what evolution is, and how it works. * BBC Focus *
Coyne is as graceful a stylist and as clear a scientific explainer as Darwin himself (no mean feat). It's one of the best single-volume introductions to evolutionary theory ever. * Wired magazine *
A masterfully concise reinstating of [Darwin's] big idea. * Karen Shook, THE *
There are many superb books on evolution, but this one is superb in a new way - it explains the latest evidence for evolution lucidly, thoroughly, and with devastating effectiveness. * Steven Pinker *
For anyone who wishes a clear, well-written explanation of evolution by one of the foremost scientists working on the subject, 'Why Evolution is True' should be your choice. * E. O. Wilson *
I once wrote that anybody who didn't believe in evolution must be stupid, insane or ignorant, and I was then careful to add that ignorance is no crime. I should now update my statement: aybody who doesn't believe in evolution is stupid, insane, or hasn't read Jerry Coyne. * Richard Dawkins *
An engaging and accessible account of one of the most important ideas ever conceived by mankind. The book is a stunning achievement, written by one of the world's leading evolutionary biologists. Coyne has produced a classic. * Neil Shubin, author of 'Your Inner Fish' *

About Jerry A. Coyne

Jerry A. Coyne is Professor of Ecology & Evolution at the University of Chicago, where he specializes in evolutionary genetics. One of the world's leading evolutionary biologists, his textbook Speciation (2004, co-written with Allen Orr ) has become the standard reference work on speciation. An influential commentator in the evolution-creationism debate through book reviews, popular and technical articles, and public lectures, Coyne is frequently asked to comment issues of creationism by journalists and broadcasters and has appeared on radio and television shows debating creationists. In 2007 he was elected to The American Academy of Arts and Sciences.

Preface ; Introduction ; 1. What is Evolution? ; 2. Written in The Rocks ; 3. Remnants: Vestiges, Embryos, and Bad Design ; 4. The Geography of Life ; 5. The Engine of Evolution ; 6. How Sex Drives Evolution ; 7. The Origin of Species ; 8. What about Us? ; 9. Evolution Redux ; Glossary ; Suggestions for Further Reading ; References

GOR003247553
Why Evolution is True by Jerry A. Coyne
Jerry A. Coyne
Oxford Landmark Science
Used - Very Good
Paperback
Oxford University Press
2010-01-14
336
0199230854
9780199230853
N/A
Book picture is for illustrative purposes only, actual binding, cover or edition may vary.
This is a used book - there is no escaping the fact it has been read by someone else and it will show signs of wear and previous use. Overall we expect it to be in very good condition, but if you are not entirely satisfied please get in touch with us.