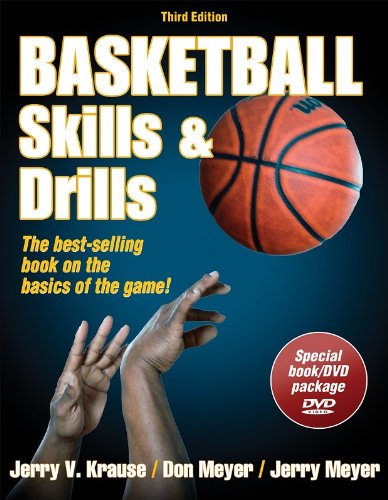 Aimed at basketball players serious about improving their game, as well as coaches looking to improve team play and incorporate drills into their practices, this book combines instruction and practice drills to establish and reinforce the fundamentals of individual and team play.

Great basketball players like Tim Duncan and Dwyane Wade draw oohs and aahs with their spectacular moves. But before those players developed their superstar flair, they built a solid base of fundamental skills in all phases of the game.

Basketball Skills & Drills provides a perfect blueprint for building the foundation that every well-rounded player needs. This special book and DVD package demonstrates each key skill:

-Moving without the ball

The skills and 90 drills, coaching tips, and DVD reinforce the skill instruction, emphasize key points, and explain how to correct common errors. And since individual skills are effective only when used within the team concept, the book also covers key team principles for both ends of the court. Tactics for offense, including special situations such as out-of-bounds plays, will improve spacing, ball and player movement, shot selection, and scoring. Defensive tactics emphasize positioning, pressure, and various systems to apply in each area or level of the court.

To be an all-star, you must be fundamentally sound. Basketball Skills & Drills is your guide to becoming a complete player-one who can change the game with great moves and smart play.

"Basketball Skills & Drills is one of the definitive books on the game. It's been an amazing resource for coaches at all levels."

"Jerry Krause, Don Meyer, and Jerry Meyer bring three generations of basketball playing and coaching expertise to bear on the fundamental skills of basketball. It is a landmark contribution for all coaches of men's and women's basketball. If you want to teach the basic skills, this book is a must."

"Basketball Skills & Drills has stood the test of time. With the inclusion of a DVD and timeless basics updated and changed for today's game, this book will continue to be a classic required by all coaches and players."

"Proper and quick execution of fundamental skills is necessary for every basketball player. The Basketball Skills & Drills package will help you develop these skills and add substance to your game."

Jerry Krause has been coaching the basics of basketball since 1959. He has experience at the elementary, high school, college, and Olympic levels, which uniquely qualifies him to help players improve their skills at all levels.

Krause is the director of men's basketball operations for Gonzaga University. During his first stint with Gonzaga, Krause was an assistant coach for eight years. In between his time at Gonzaga, Krause spent five years at the U.S. Military Academy at West Point serving as a professor of sport philosophy, director of instruction for the physical education department, and assistant women's coach. Prior to his latest endeavors, Jerry Krause was head coach of the Eastern Washington University Eagles. During Krause's tenure his Eagle teams compiled a 262-196 (.572) record.

Krause has been a leader in national associations dedicated to the continued growth of basketball. He served on the selection committee of the National Basketball Hall of Fame, the board of directors of the National Association of Basketball Coaches (NABC), and the NCAA rules committee. He is the NABC research chair and a member of the NAIA Basketball Coaches Hall of Fame and the National Association for Sport and Physical Education Hall of Fame. He holds a bachelor's degree from Wayne State University and master's and doctoral degrees from the University of Northern Colorado.

Krause was recognized for lifetime contributions to basketball as the 2007 Battle in Seattle honoree by Northwest Sports and Gonzaga University. He is the most widely published coach in basketball history, having written more than 30 books on coaching basketball. He resides in Cheney, Washington.

See his Web site at www.CoachJerryKrauseonline.com for more information.

Don Meyer is the head coach at Northern State University in Aberdeen, South Dakota. His 860-plus wins put him in fifth place on the all-time list of coaches in men's collegiate basketball. Before his term at Northern State University, Meyer was the head men's basketball coach at Lipscomb University in Nashville for 24 seasons, where he reached the 700-win plateau faster than any other coach in college basketball. Named the National Coach of the Year in 1989 and 1990, Meyer was inducted into the NAIA Hall of Fame in 1993. See www.Northern.edu.

In addition to coaching, Meyer has established a coaching academy that has attracted more than 10,000 basketball coaches from all over the United States. His reputation as a coach and teacher has allowed him to attract some of the most renowned coaches, including Pat Summitt and John Wooden, to speak at his academy. He resides in Aberdeen, South Dakota.

Jerry Meyer is the chief analyst and scout for the Rivals.com basketball recruiting coverage. He is a nationally recognized basketball instructor whose expertise dates back to his high school playing days when he won Tennessee's Mr. Basketball award in his junior and senior seasons. As a college player for Lipscomb University and the University of Minnesota at Duluth, Meyer was a two-time All-American and became college basketball's career assist leader. Meyer has been a high school head coach, has served as an assistant at Vanderbilt University, and has been a head coach in the American Basketball Association. Jerry lives in Nashville, Tennessee.

GOR004256651
9780736067072
0736067078
Basketball Skills & Drills by Jerry Krause
Jerry Krause
Skills & Drills
Used - Very Good
Hardback
Human Kinetics Publishers
2007-08-29
272
N/A
Book picture is for illustrative purposes only, actual binding, cover or edition may vary.
This is a used book - there is no escaping the fact it has been read by someone else and it will show signs of wear and previous use. Overall we expect it to be in very good condition, but if you are not entirely satisfied please get in touch with us
Trustpilot