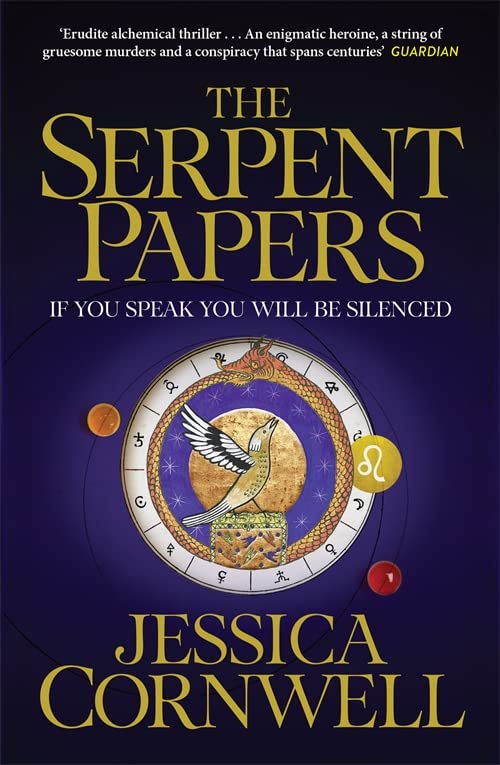 The Serpent Papers
by Jessica Cornwell

Used Price
$15.49
inc. GST
Free Shipping in Australia
An ingenious, intelligent literary thriller that has been one of the hottest and highly-praised debuts of 2015
Very Good

The Serpent Papers by Jessica Cornwell

I am Anna Verco.
I am no ordinary researcher.

My task is to hunt a medieval manuscript, a book of alchemy and witchcraft.
It was lost for centuries, hidden - or stolen. But I have found a clue.
In Barcelona, just ten years ago, a trail of women were muted and mutilated to keep it secret.
They have been silenced. But in a way, I hear them.
Their message is meant for me.

The kind of rich, multi-layered story that demands and rewards commitment . . . A triumphant debut, by a young writer with an incredible imagination * The Times *
Erudite alchemical thriller . . . Here we have an enigmatic heroine, a wonderful European city, plenty of cultural detail, a string of gruesome murders and a conspiracy that spans centuries . . . everything is relevant - so pay attention - and everything is enticing, for readers who enjoy this sort of game . . . she's an original, entertaining writer. I finished this episode wanting more * Guardian *
Combines the intrigue of The Da Vinci Code with the mysticism of a Carlos Ruiz Zafon novel . . . This is a gripping tale in which every detail counts * Financial Times *
Intelligent and richly realised * Oxford Times *
A complex and ambitious literary thriller * Observer *
If you're in search of a thriller, look no further than this novel by London-based Californian Jessica Cornwell. Anna Verco, the heroine, has drawn comparisons to Dragon Tattoo's Lisbeth Salander, and the book is a new take on Dan Brown's turf * Grazia *
The slow circling towards the killer is thrilling, but Cornwell's real skill is in her piling up of legend and history to bring the quest for the manuscript alive. This is much more complex - and significantly more worth your time - than just another Da Vinci Code spin-off * Sunday Times *
Remarkable . . . It will leave many readers impatient for the next * Literary Review *
A breathless, mystical thriller . . . Will certainly become a cultish craze among all kinds of readers from radical feminists to modern-day mystics and especially those who love sectish puzzles and mystery * Irish Independent *
Jessica Cornwell gives women a powerful voice . . . A nail-biting page-turner with a vital female protagonist who stands out in a thriller market flooded with the male-centric books . . . A complex, non-linearly-told narrative that haunts the mind long after the last page * Straits Times *
A feminist gothic thriller set in Barcelona, it moves back and forth between the 1300s and the present day * Big Issue *
A supremely clever feminist murder mystery * Vagenda *

Jessica Cornwell was born in 1986. She studied English at Stanford University and Drama at the Autonomous University of Barcelona, before training with the Catalan theatre company La Fura dels Baus. In 2010 she moved to London to work in film. She now divides her time between the city and her small home town in southern California.

GOR006931911
The Serpent Papers by Jessica Cornwell
Jessica Cornwell
The Serpent Papers Trilogy
Used - Very Good
Paperback
Quercus Publishing
2015-09-10
496
1848666756
9781848666757
N/A
Book picture is for illustrative purposes only, actual binding, cover or edition may vary.
This is a used book - there is no escaping the fact it has been read by someone else and it will show signs of wear and previous use. Overall we expect it to be in very good condition, but if you are not entirely satisfied please get in touch with us.