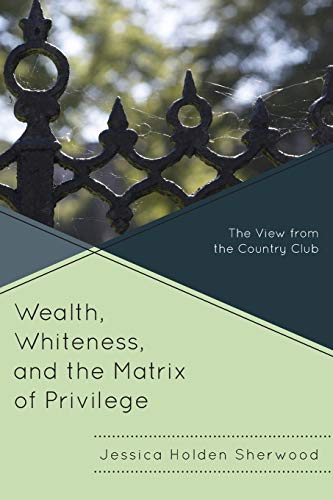 Wealth, Whiteness, and the Matrix of Privilege
by Jessica Holden Sherwood

Out of Stock
$53.99
inc. GST
Wealth, Whiteness, and the Matrix of Privilege reports on interviews with members of exclusive country clubs in the Northeast. The club members explain their exclusive and sometimes sexist practices. Their talk both relies on and reproduces popular discourse. The author shows how club members end up justifying and maintaining their class, race, and gender privileges.
Very Good
Only 0 left

Wealth, Whiteness, and the Matrix of Privilege Summary

Wealth, Whiteness, and the Matrix of Privilege: The View from the Country Club by Jessica Holden Sherwood

Exclusive social clubs are traditionally an important site for the consolidation of upper-class power. Wealth, Whiteness, and the Matrix of Privilege shows that while the particulars of admission have changed, these clubs remain socially significant incubators. Having interviewed typically inaccessible members of exclusive clubs in the Northeast, Jessica Holden Sherwood reports and analyzes what they have to say about who is in, who is out, and why. The members talk frankly about their exclusiveness based on money and style, but they are quick to point out that ethnically-based exclusion is a thing of the past. Club members also address the status of their women members, which is at times distinctly second-class. The talk of country club members is shown to draw on elements in popular discourse. And even if it's not their intention, as club members exclude and account for their exclusion, they contribute to reproducing class, race, and gender inequalities.

Wealth, Whiteness, and the Matrix of Privilege Reviews

Country clubs are places people join in order to play golf and spend time with like-minded people. Most are quite expensive and hence are exclusive. Few members of such clubs are nonwhite-another form of exclusion. Most clubs now have women members, but they are kept in 'their place,' e.g., with limited times for playing golf. In her study of four country clubs, which are mainly male, white, and wealthy, Sherwood (Rhode Island) asks how members account for their exclusive conduct. ("Account" is the sociological term that refers to the way people explain or justify their behavior.) The account given for excluding the less well off is just that: they cannot afford membership. Most members deny racial exclusion because of one or two wealthy and professional African American members. The subtle, disguised account for the subordinate status of women in the clubs is that it is like their place in family, namely, not quite equal partners. Sherwood's many cited member comments . . . convey a sense of the varied mind-sets of club members. Summing Up: Recommended. * CHOICE *
Jessica Sherwood has produced a book that is worthy of serious attention. . . . A strength of the book is the thorough methodology which Sherwood refers to frequently throughout her narrative and also further extends in a separate section. Additionally, Sherwood gives thoughtful insights into how the thoughts and opinion of the affluent affect those around them. . . . Wealth, whiteness and the matrix of privilege: The View from the Country Club is well organized, thorough and thought provocative. Sherwood has provided a safe place in which to explore the matrix of the privileged as we beat on against the currents of our stations in life. * Journal of Social Science *
Sherwood's analysis of country clubs provides valuable insight into some of the ways that privilege is maintained and protected at both social and structural levels. She goes to great lengths to continually connect the microlevel interactions of club members to larger macrostructures and processes. For those who have never been privy to seeing inside the walls of America's elite country clubs, Sherwood provides several well-developed reasons why that might be the case. * Oxford Journals *
This rare and informative interview study of members of high-status social clubs fully reveals the clubs' role in generating the social and cultural capital that help maintain class dominance in the United States. -- G William Domhoff, University of California, Santa Cruz

GOR010193242
Wealth, Whiteness, and the Matrix of Privilege: The View from the Country Club by Jessica Holden Sherwood
Jessica Holden Sherwood
Used - Very Good
Paperback
Lexington Books
2013-03-14
180
073918296X
9780739182963
N/A
Book picture is for illustrative purposes only, actual binding, cover or edition may vary.
This is a used book - there is no escaping the fact it has been read by someone else and it will show signs of wear and previous use. Overall we expect it to be in very good condition, but if you are not entirely satisfied please get in touch with us.