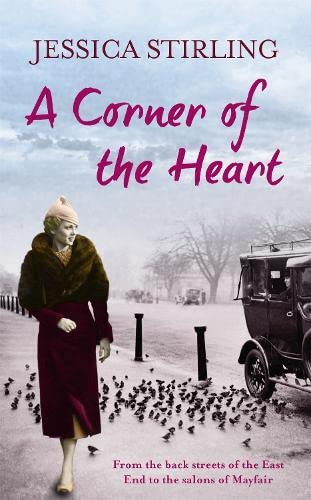 A Corner of the Heart
by Jessica Stirling

An east end girl makes a surprising journey through 1930s London in the new saga by one of Britain's best-loved storytellers.

A Corner of the Heart Summary

A Corner of the Heart: The Hooper Family Saga Book One by Jessica Stirling

The first novel in Jessica Stirling's enthralling saga series is set in 1930s England, where an East End girl with ideas of her own makes a surprising journey from the back streets of Shadwell to the salons of Mayfair.

Susan Hooper is private secretary to bestselling author, Vivian Proudfoot. Well-spoken and well-read, she soon learns how to hold her own with London's literary sophisticates. But the attentions of Mercer Hughes, a handsome agent with a notorious reputation and a shady past, are more than a docker's daughter can cope with and she finds herself falling reluctantly in love.

She is soon cut off from her father and at loggerheads with her idealistic brother Ronnie and his gadabout wife Breda. Even her old friend, newspaperman Danny Cahill, is shocked at the circles in which Susan finds herself where pimps and gangsters rub shoulders with wealthy fascist sympathisers in support of the war in Spain.

As the threat of world war grows Susan is torn between loyalty to her family and a lover who will not let her go. But when the time comes to choose she finds a solution that surprises everyone.

A Corner of the Heart Reviews

Jessica Stirling's high reputation is well deserved. * Manchester Evening News *
She writes in bright colours with bold, confident strokes. * Glasgow Herald *
Jessica Stirling is one of Scotland's most prolific and best-loved authors. * Scottish Daily Record *
One of the best. * Bookseller *

Born in Glasgow, Jessica Stirling is the author of many heartwarming novels, most of which have Scottish backgrounds. She has enjoyed a highly successful career since THE SPOILED EARTH was published in 1974.

GOR003617461
A Corner of the Heart: The Hooper Family Saga Book One by Jessica Stirling
Jessica Stirling
The Hooper Family Saga
Used - Very Good
Paperback
Hodder & Stoughton General Division
2011-12-08
368
0340998385
9780340998380
N/A
Book picture is for illustrative purposes only, actual binding, cover or edition may vary.
This is a used book - there is no escaping the fact it has been read by someone else and it will show signs of wear and previous use. Overall we expect it to be in very good condition, but if you are not entirely satisfied please get in touch with us.