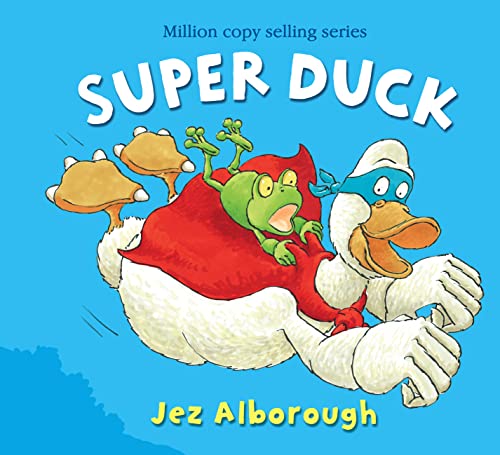 Goat is eager to try out his new kite with the help of friends, Sheep and Frog. But, just they are about to see if it will fly, Super Duck arrives in his super truck. And, as always when Duck is around, things are bound to go wrong! Indeed it is not long before Frog is carried up into the sky on the end of the kite's string. Poor Frog!

Can Super Duck save the day?

`With a nod to Dr. Seuss and a wink to John Burningham, Jez Alborough deals an irresistible lesson in rhyme and rhythm as well as storytelling, which is hugely entertaining.' Child Education

Reviews for Duck in the Truck:

`Alborough's text is perfect for reading out loud and the mix of close-up and panoramic illustrations give an animated, live-action feel.' Junior

Praise for Hit the Ball Duck:
`A really great story; the best Duck book so far.' The Guardian

Jez was born in Kingston upon Thames in 1959. He went to art school in Norwich and then set about entering the competitve world of children's books.
Jez has now written and illustrated over thirty picture books for children, he was runner up of the 1985 Mother Goose Award with his first book Bare Bear.
Jez lives in Richmond, Surrey, with his Danish wife.

GOR002686755
Super Duck by Jez Alborough
Jez Alborough
Used - Very Good
Paperback
HarperCollins Publishers
2009-05-28
32
0007273274
9780007273270
N/A
Book picture is for illustrative purposes only, actual binding, cover or edition may vary.
This is a used book - there is no escaping the fact it has been read by someone else and it will show signs of wear and previous use. Overall we expect it to be in very good condition, but if you are not entirely satisfied please get in touch with us.