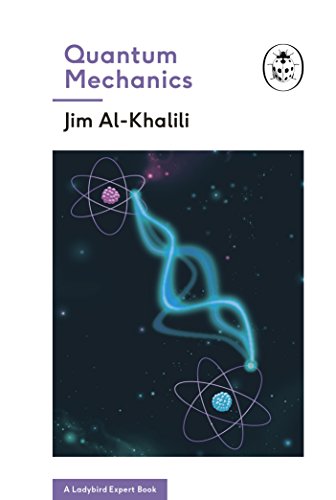 What is quantum mechanics? Learn from the experts in the ALL-NEW LADYBIRD EXPERT SERIES

A clear, simple and entertaining introduction to the weird, mind-bending world of the very, very small.

You'll discover:
- How the sun shines
- Why light is both a wave and a particle
- The certainty of the Uncertainty Principle
- Schrodinger's Cat
- Einstein's spooky action
- How to build a quantum computer
- Why quantum mechanics drives even its experts completely crazy

'Jim Al-Khalili has done an admirable job of condensing the ideas of quantum physics from Max Planck to the possibilities of quantum computers into brisk, straightforward English' THE TIMES

Learn about other topics in the Ladybird Experts series including The Big Bang, Gravity, Climate Change and Evolution.

Written by the leading lights and most outstanding communicators in their fields, the Ladybird Expert books provide clear, accessible and authoritative introductions to subjects drawn from science, history and culture.

Jim Al-Khalili has done an admirable job of condensing the ideas of quantum physics from Max Planck to the possibilities of quantum computers into brisk, straightforward English

Professor Jim Al-Khalili, OBE FRS, is a physicist, author and broadcaster based at the University of Surrey. He received his PhD in theoretical nuclear physics in 1989 and has published over a hundred research papers on quantum physics.
His many popular science books have been translated into twenty-six languages. He is a recipient of the Royal Michael Faraday medal and the Institute of Physics Kelvin Medal.
In 2016 he received the inaugural Stephen Hawking Medal for Science Communication. He lives in Southsea, Hampshire, with his wife Julie.

GOR008133046
Quantum Mechanics (A Ladybird Expert Book) by Jim Al-Khalili
Jim Al-Khalili
The Ladybird Expert Series
Used - Very Good
Hardback
Penguin Books Ltd
2017-01-26
56
0718186273
9780718186272
N/A
Book picture is for illustrative purposes only, actual binding, cover or edition may vary.
This is a used book - there is no escaping the fact it has been read by someone else and it will show signs of wear and previous use. Overall we expect it to be in very good condition, but if you are not entirely satisfied please get in touch with us.