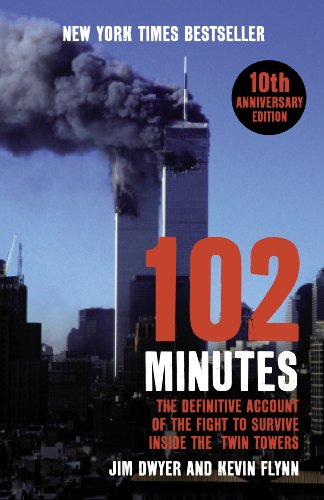 In Stock
$12.99
inc. GST
Crossing a bridge of voices to go inside the infernos, seeing cataclysm and herosim one person at a time, Dwyer and Flynn tell the affecting, authoritative saga of the men and women - the 12,000 who escaped and the 2,749 who perished at Ground Zero on September 11th 2001 - as they made 102 minutes count as never before.
Very Good Good Well Read
20 in stock

At 8.46 am on September 11, 2001, 14,000 people were inside the Twin Towers in New York - reading emails, making calls, eating croissants... over the next 102 minutes each would become part of the most infamous and deadly terrorist attack in history, one truly witnessed only by the people who lived through it - until now. Of the millions of words written about that unforgettable day when Al Qaeda attacked the western world, most have been from outsiders. New York Times reporters Jim Dwyer and Kevin Flynn have taken the more revealing approach - using real-life testimonies to report solely from the perspective of those inside the towers. 102 Minutes is the epic account of ordinary men and women whose lives were changed forever in this kamikaze act of terrorism. This unique book about unique people, includes incredible stories of bravery, courage and overcoming unbelievable odds. Immortalised in this non-fiction masterpiece are the construction manager and his colleagues who pried open the doors and saved dozens of people in the north tower; the police officer who was a few blocks away, filing his retirement papers, but grabbed his badge and sprinted to the buildings; the window washer stuck in a lift fifty floors up who used a squeegee to escape; and the secretaries who led an elderly man down eighty-nine flights of stairs. Chance encounters, moments of grace, a shout across an office shaped these minutes, marking the border between fear and solace, staking the boundary between life and death. Crossing a bridge of voices to go inside the infernos, seeing cataclysm and herosim one person at a time, Dwyer and Flynn tell the affecting, authoritative saga of the men and women - the 12,000 who escaped and the 2,749 who perished at Ground Zero on September 11th 2001 - as they made 102 minutes count as never before.

"A heart-stopping, meticulous account ... a fitting tribute to the people caught up in one of the great dramas of our time ... a cathartic release" * New York Times *
"Heartbreaking and inspiring" * Boston Herald *
"With its tragic and preordained conclusion, the book becomes a tearjerker in the most essential way" * Entertainment Weekly *
"Writing in a way that confers dignity on each subject ... This is one book that will stay with readers for a long time" * People *
"Insightful, compassionate and unrelievedley tense" * Baltimore Sun *

Jim Dwyer and Kevin Flynn, native New Yorkers, veteran newspaper reporters, and winners of many awards together and separately, now work at the New York Times. Dwyer is the co-author of Two Seconds Under The World, an account of the 1993 effort to knock down the World Trade Centre, and of Actual Innocence: Five Days to Execution and Other Dispatches from the Wrongly Convicted. He is also the author of Subway Lives: 24 Hours in the Life of the New York City Subway. Flynn, a special projects officer at the Times, was the newspaper's police bureau chief on September 11th 2001. He previously worked as a reporter for the New York Daily News, New York Newsday and the Stamford Advocate.

GOR000513700
102 Minutes by Jim Dwyer
Jim Dwyer
Used - Very Good
Paperback
Cornerstone
2005-09-01
352
0099492563
9780099492566
N/A
Book picture is for illustrative purposes only, actual binding, cover or edition may vary.
This is a used book - there is no escaping the fact it has been read by someone else and it will show signs of wear and previous use. Overall we expect it to be in very good condition, but if you are not entirely satisfied please get in touch with us.