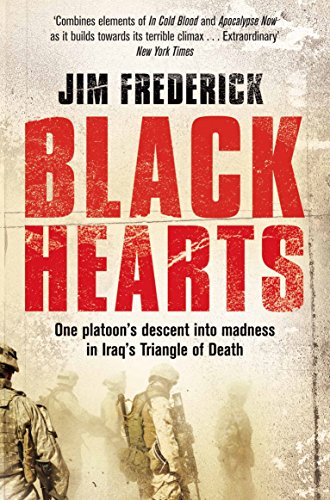 In Stock
$15.99
+10% GST
Quite possibly the defining book about the Iraq War, a masterpiece of reportage that reads like a thriller
Very Good Good Well Read
Only 2 left

Black Hearts: One platoon's descent into madness in the Iraq war's triangle of death by Jim Frederick

'The best book by far about the Iraq war' Guardian

Iraq, 2005. A platoon of young soldiers from a U.S. regiment known as `the Black Heart Brigade' is deployed to a lawless and hyperviolent area south of Baghdad. As the unstopping violence destroys their morale, the soldiers descend into brutality, substance abuse and madness - with horrific results.

Black Hearts is a timeless story of how warfare can reduce men to animals. Told with insight and compassion, but with the magnetic pace of a thriller, it is one of the defining books about the Iraq War.

'There have been many books about the Iraq war, but this is an unusally gripping one ... A shocking story, vividly told' Max Hastings, Sunday Times

"Riveting. . . A narrative that combines elements of 'In Cold Blood' and 'Black Hawk Down' with a touch of 'Apocalypse Now' as it builds toward its terrible climax....Frederick's extraordinary book is a testament to a misconceived war, and to the ease with which ordinary men, under certain conditions, can transform into monsters. . . . Extraordinary."-"New York Times Book Review" "Meticulous. . . . Demands to be read." -"Washi"ngton Post"" "Frederick, taking the story through to the surprising effect of the beheadings, the conclusion of the war crime trials and the impact that they had on the Iraqi relatives of the slain and the members of Bravo Company, tells the complex story in raw, compassionate and exact detail. "Black Hearts" should be taught at West Point, Annapolis, and wherever else the styles and consequences of combat leadership are studied."-HuffingtonPost.com "Gripping. . . . A model of extended

Jim Frederick is a contributing editor at Time magazine. He was previously a Time senior editor in London and, before that, the magazine's Tokyo bureau chief. He lives in New York City.

GOR003240601
Black Hearts: One platoon's descent into madness in the Iraq war's triangle of death by Jim Frederick
Jim Frederick
Used - Very Good
Paperback
Pan Macmillan
2011-07-15
464
0330533479
9780330533478
N/A
Book picture is for illustrative purposes only, actual binding, cover or edition may vary.
This is a used book - there is no escaping the fact it has been read by someone else and it will show signs of wear and previous use. Overall we expect it to be in very good condition, but if you are not entirely satisfied please get in touch with us.