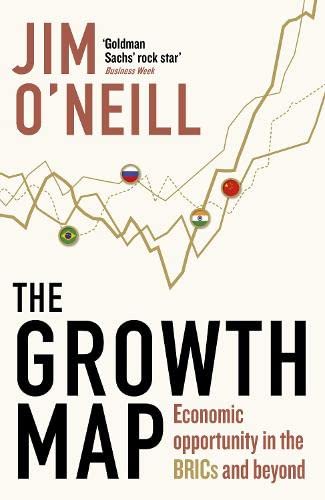 The Growth Map
by Jim O'Neill

In Stock
$11.49
+10% GST
A different era was rising in which Brazil, Russia, India and China, overflowing with raw materials and ambition, would overtake the largest Western economies. The BRICs concept was born. This title offers an account of the BRICs phenomenon and how it has taken on a life of its own.
Very Good
Only 3 left

The Growth Map: Economic Opportunity in the BRICs and Beyond by Jim O'Neill

Ten years ago, Jim O'Neill made a startling prediction: the G-7 countries including the US, the UK and Japan would no longer be the world's economic powerhouses. With globalization, a new era would emerge in which the emerging forces of Brazil, Russia, India and China - populous, increasingly urbanized and overflowing with raw materials and ambition - would overtake the largest Western economies. The BRICs were born. No other economic idea has defined the 21st Century more powerfully or more accurately. In the past decade all four BRIC nations have experienced significant growth and are now among the top ten economies in the world. Jim O'Neill's single prediction has spurred economic and social change, created new political structures and challenged the thinking of business leaders, governments, and decision makers. But what does the future hold? Can the BRICs sustain their exceptional levels of growth? Which other nations will drive economic power further south and east? In this landmark book Jim O'Neill, chairman of Goldman Sachs Asset Management, shares his insights on how and why he developed one of the most compelling economic concepts of our time. He sets out the 'Next 11' concept for the set of fast-growing countries that could have a BRIC-like impact on the world (Bangladesh, Egypt, Indonesia, Iran, Mexico, Nigeria, Pakistan, Philippines, South Korea, Turkey and Vietnam). And he redefines those that offer the strongest potential for transformation as Growth Markets. The world needs growth. The world needs The Growth Map.

There is no better guide to the new map of the economic world than Jim O'Neill. This sharp, shrewd book tells the big story of our time: the fundamental shift of economic power from the West to the Rest -- Niall Ferguson, author of The Ascent of Money and Civilisation
Jim O'Neill has redefined how investors and Western business leaders see the world. This book tells the unlikely story of how O'Neill developed this path-breaking idea... lively, powerful and highly accessible -- Gillian Tett * Financial Times *
Jim O'Neill challenges the lazy consensus and persuades us that the great swing to the East should be welcomed rather than resented by an anxious West. This is a book we all needed -- Sir Martin Sorrell, CEO, WPP
In four letters, Jim O'Neill identified one of the most consequential themes of the twenty-first century. Jim has changed how the world thinks about economic growth - and how the BRICs think about themselves -- Lloyd Blankfein, chairman and CEO, Goldman Sachs
Jim O'Neill is Goldman Sachs' rock star * Business Week *

Jim O'Neill is Chairman of Goldman Sachs Asset Management. He joined Goldman Sachs in 1995, rising to chief economist, and in 2001 he led the team that conducted the original BRIC analysis. He is chairman of the charity SHINE, and a member of the boards of the UK Royal Economic Society, Itinera and Bruegel. He has a lifelong passion for Manchester United FC, and has served as a non-executive director of the club's board.

GOR003589425
The Growth Map: Economic Opportunity in the BRICs and Beyond by Jim O'Neill
Jim O'Neill
Used - Very Good
Hardback
Penguin Books Ltd
2011-12-01
272
0670921262
9780670921263
N/A
Book picture is for illustrative purposes only, actual binding, cover or edition may vary.
This is a used book - there is no escaping the fact it has been read by someone else and it will show signs of wear and previous use. Overall we expect it to be in very good condition, but if you are not entirely satisfied please get in touch with us.