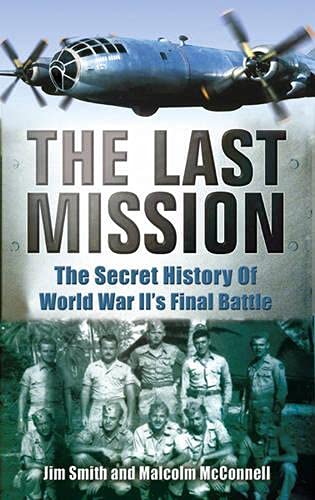 The Last Mission
by Jim Smith

In Stock
$15.49
inc. GST
Fearing that the approaching planes could be carrying another atom bomb, Japanese air defences ordered a total black out of the city and the Imperial palace and in so doing completely disrupted the rebels' plans, enabling soldiers loyal to the Emperor to sieze back control.
Very Good
Only 2 left

The Last Mission by Jim Smith

14 August 1945. As Emperor Hirohito recorded a message of surrender for the Japanese people, rebel troops commanded by high-ranking officers from War Minister Anami(1)s staff burst into the Imperial palace. Their intention was to stage a coup, destroy the recording and issue forged orders for Japan to continue the war. Had they succeeded, there would have been massive kamikaze attacks on allied forces, causing carnage and possibly provoking America to drop a third atomic bomb on an already devastated Japan... But on that fateful night, in the skies approaching Tokyo, a stream of B-29B 'Superfortress' bombers were heading towards Japan's last functioning oil refinery. Fearing that the approaching planes could be carrying another atom bomb, Japanese air defences ordered a total black out of the city and the Imperial palace and in so doing completely disrupted the rebels' plans, enabling soldiers loyal to the Emperor to sieze back control. At midday on 15 August 1945, the Imperial message of surrender was broadcast throughout Japan. The Second World War was finally over. THE LAST MISSION is gripping work of speculative investigation into one of the least known yet profoundly significant episodes of World War II.

"'Fascinating...a breathtaking blend of memoir, investigative research and imagination'" -- Iris Chang, author of The Rape of Nanking
"'Skillfully weaving personal and archival history, The Last Mission gives us a haunting glimpse of just how close we came to the brink of waging a final desperate war on Japanese soil'" -- Hampton Sides, author of Ghost Soldiers
"'The Last Mission is an exciting, highly readable, minute-to-minute account of the last air raid on Tokyo, which, according to co-author Jim Smith, a participant in the attack, foiled a Japanese army attempt to prevent the emperor from surrendering to the Allies and a Soviet plan to occupy Japan'" -- Dan Kurzman, author of Fatal Voyage

Jim Smith served with the 315th Bomb Wing, 20th Air Force, during the Second World War, when he was a radio operator of a B-29B bomber named The Boomerang. He has researched The Last Mission for more than twenty years. Malcolm McConnell is the author or co-author of twenty-three books, many of them on military subjects. He most recently co-wrote Born to Fly with navy pilot Shane Osborn. He lives near Washington D.C.

GOR001007074
The Last Mission by Jim Smith
Jim Smith
Used - Very Good
Paperback
Transworld Publishers Ltd
2003-07-14
448
0553816101
9780553816105
N/A
Book picture is for illustrative purposes only, actual binding, cover or edition may vary.
This is a used book - there is no escaping the fact it has been read by someone else and it will show signs of wear and previous use. Overall we expect it to be in very good condition, but if you are not entirely satisfied please get in touch with us.