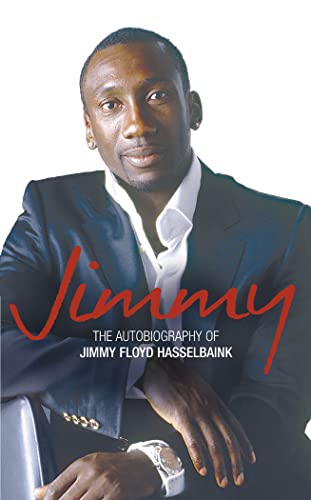 A predator in front of goal, Jerrell, as his mother calls him, had made his name in Portugal with Boavista, before George Graham snapped him up for Leeds in summer 1997. His goalscoring made him an instant hero at Elland Road, a status he lost when he asked to leave the club because they wouldn't pay him enough. In his book, Hasselbaink is forthright about his time at Leeds, and how he felt betrayed by the club and its fans, despite the fact that he was their leading scorer for two seasons.

After a GBP12 million transfer to Atletico Madrid, and despite playing in a relegated side in La Liga, he finished up as the top scorer, and was snapped up by Chelsea as soon as the 1999/2000 season had finished. He immediately proved his worth by winning the Premiership's golden boot award for the 2000/01 season.

In the summer of 2004, a new coach at Chelsea in the form of Jose Mourinho meant that Hasselbaink's days at the club were numbered, and a transfer to Middlesbrough opened up a new chapter in his life. In his final season with the club, he reached the final of the UEFA Cup and the semi-finals of the FA Cup.

Hasselbaink talks candidly about his fellow professionals in the game: the likes of David O'Leary, Claudio Ranieri, Gianfranco Zola, Roman Abramovich and Steve McClaren, plus his troubled times with the Dutch national team. He is also open about the crimes of his youth, his taste for gambling and the clubbing scene, and his private life, including his parents' divorce and his daughter in Amsterdam.

`Explosive' News of the World

Jimmy Floyd Hasselbaink was born in Paramibo, Surinam, in 1972. He made his professional football debut for Telstar in the Dutch league as an 18-year-old. Since then he has played for Boavista, Leeds United, Atletico Madrid, Chelsea and Middlesbrough. He has signed for Charlton Athletic for the 2006-07 season. He has also won 23 international caps for Holland.

GOR003605353
Jimmy: The Autobiography of Jimmy Floyd Hasselbaink by Jimmy Floyd Hasselbaink
Jimmy Floyd Hasselbaink
Used - Very Good
Paperback
HarperCollins Publishers
2006-08-07
304
0007213883
9780007213887
N/A
Book picture is for illustrative purposes only, actual binding, cover or edition may vary.
This is a used book - there is no escaping the fact it has been read by someone else and it will show signs of wear and previous use. Overall we expect it to be in very good condition, but if you are not entirely satisfied please get in touch with us.