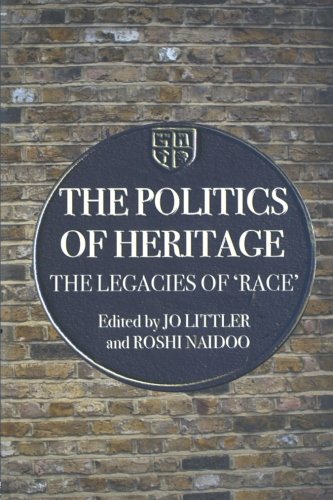 The Politics of Heritage
by Jo Littler

Used Price
$54.99
inc. GST
Free Shipping in Australia
Bringing together a wide range of contributors, this book examines how many different of types of heritage - from football to stately homes, experience attractions to education - deal with the complex legacies of the idea of 'race'. It interrogates just whose past gets to count as part of 'British heritage'.
Very Good

The Politics of Heritage Summary

The Politics of Heritage: The Legacies of Race by Jo Littler

While 'social inclusion' and 'cultural diversity' circulate frenetically as buzzwords, are we really ready to accept that ideas about 'race' and 'ethnicity', rather than being a peripheral concern, are at the core of how a nation's heritage is represented and imagined?
This book interrogates just whose past gets to count as part of 'British heritage'. Bringing together a wide range of contributors, including academics, practitioners, policy makers and curators, it examines how many different of types of heritage - from football to stately homes, experience attractions to education - deal with the complex legacies of the idea of 'race'.
Whether exploring the fallout of colonialism, the domination of 'England' over the other three nations, holocaust memorials, or the way British heritage is negotiated overseas, a recurring theme of this book is the need to accept that Britain has always been a place of shifting ethnicities, shaped by waves of migration, diaspora and globalization.
Analyzing both theory and practice, this book is concerned with understanding the processes through which changes to heritage happens, and with exploring problems and possibilities for the future.

Introduction: British heritage and the legacies of 'race', Part One: British Heritage as International Heritage, 1 Whose Heritage? Unsettling 'the Heritage', re-imagining the post-nation, 2 Never Mind the Buzzwords: 'race', heritage and the liberal agenda, 3 Commemorating the Holocaust: reconfiguring national identity in the twenty-first century, 4 Museums, communities and the politics of heritage in Northern Ireland, 5 Ghosts: heritage and the shape of things to come, 6 Fragments from the margins: conflicting national and local identities in Scotland, 7 Reinventing the nation: British heritage and the bicultural settlement in New Zealand, Part Two: Process, Policy, Practice, 8 Taking root in Britain: the process of shaping heritage, 9, What a difference a Bay makes: cinema and Welsh heritage, 10 History teaching and heritage education: two sides of the same coin, or different currencies?, 11 Picture This: the 'black' curator, 12 A community of communities, 13 Inheriting diversity: archiving the past, 14 Keep the flags flying: World Cup 2002, football and the remaking of Englishness, Afterword: 'Strolling spectators' and 'practical Londoners': remembering the imperial past

GOR002931859
The Politics of Heritage: The Legacies of Race by Jo Littler
Jo Littler
Comedia
Used - Very Good
Paperback
Taylor & Francis Ltd
2005-02-07
288
0415322111
9780415322119
N/A
Book picture is for illustrative purposes only, actual binding, cover or edition may vary.
This is a used book - there is no escaping the fact it has been read by someone else and it will show signs of wear and previous use. Overall we expect it to be in very good condition, but if you are not entirely satisfied please get in touch with us.