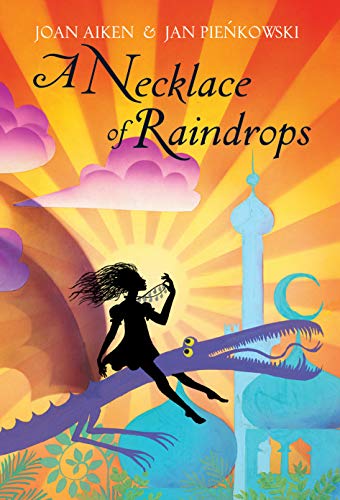 A Necklace Of Raindrops
by Joan Aiken

Out of Stock
$23.49
+10% GST
From 'A Necklace of Raindrops' to 'The Patchwork Quilt', here are eight classic stories to treasure and enjoy. a house that stands on one leg - these are just some of the objects and characters that figure in these delightful stories.
Very Good
Only 0 left

A Necklace Of Raindrops Summary

A Necklace Of Raindrops by Joan Aiken

"This is how it all began..." From 'A Necklace of Raindrops' to 'The Patchwork Quilt', here are eight classic stories to treasure and enjoy. Beginning and ending with a birthday, this spell-binding collection conjures up a world filled with magic, where wishes can come true. A necklace of raindrops that keeps its owner dry in the heaviest rainstorm; a tiger that runs faster than the wind; a huge floating apple pie with a piece of sky in it; a baker's cat who swells to the size of a whale when his mistress feeds him yeast; a house that stands on one leg - these are just some of the objects and characters that figure in these delightful stories.

A Necklace Of Raindrops Reviews

"Magic has never been more elegantly shaped than in these effervescent short stories . . . The flight of imagination is delicately captured in Jan Pienkowski's accompanying silhouettes" -- Julia Eccleshare * Guardian *
"A Necklace of Raindrops is something that should be on every child's shelf" -- Amanda Craig * The Times *
"A little dark and often surreal" -- Lydia Fulton * Financial Times *
"Jan Pienkowski, whose magical silhouttes were never so finely matched as with the wonderful Joan Aiken's fine short stories . . . A treat" * Evening Standard *

Joan Aiken (Author) Joan Aiken was born in Sussex in 1924. She was the daughter of the American poet, Conrad Aiken; her sister, Jane Aiken Hodge, is also a novelist. Before joining the 'family business' herself, Joan had a variety of jobs, including working for the BBC, the United Nations Information Centre and then as features editor for a short story magazine. Her first children's novel, The Kingdom of the Cave, was published in 1960. Joan Aiken wrote over a hundred books for young readers and adults and is recognized as one of the classic authors of the twentieth century. Amanda Craig, writing in The Times, said, 'She was a consummate story-teller, one that each generation discovers anew.' Her best-known books are those in the James III saga, of which The Wolves of Willoughby Chase was the first title, published in 1962 and awarded the Lewis Carroll prize. Both that and Black Hearts in Battersea have been filmed. Her books are internationally acclaimed and she received the Edgar Allan Poe Award in the United States as well as the Guardian Award for Fiction in this country for The Whispering Mountain. Joan Aiken was decorated with an MBE for her services to children's books. She died in 2004.Jan Pienkowski (Illustrator) Jan Pienkowski was born in Warsaw in 1936. After creating his first book at the age of eight, Jan went on to excel in his chosen field of design, working in such diverse areas as television, theatre and greetings cards. Published in 1968, A Necklace of Raindrops was the first of several wonderful collaborations between Jan and Joan Aiken - and it was also the very first book Jan illustrated. He has since twice won the Kate Greenaway Medal for Illustration, and has created many instantly recognizable classics.

GOR003585177
A Necklace Of Raindrops by Joan Aiken
Joan Aiken
Used - Very Good
Hardback
Random House Children's Publishers UK
2009-11-05
108
0224083805
9780224083805
N/A
Book picture is for illustrative purposes only, actual binding, cover or edition may vary.
This is a used book - there is no escaping the fact it has been read by someone else and it will show signs of wear and previous use. Overall we expect it to be in very good condition, but if you are not entirely satisfied please get in touch with us.