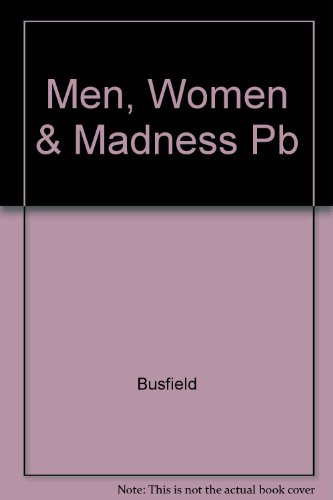 The questions of what defines mental illness and what language should be used to define it are the subject of much debate in the mental health professions. Within this debate lies the question of how the diagnosis of mental illness relates to gender, and more specifically why it is that women are frequently assumed to be more prone to mental disorder than men.

In Men, Women and Madness, Joan Busfield examines the complex gendered landscape of mental disorder, explaining how the very idea of mental disorder has been used to set the boundaries of rationality and reason within society, and that societally- held notions about gender have very much permeated its category constructions. Central to Busfield's argument are two claims: that mental disorder--a category whose boundaries are contested--is best understood as a territory that marks disturbances of reason and rationality; and that gender (along with other social characteristics) permeates categories of mental disorder.

Busfield argues that there is no evidence either of a greater biological vulnerability of women than men to mental disorder, or that women have had to cope with more stressful events in their lives than men. Instead, Busfield suggests that cultural factors, in particular power, are the locus of the differences in mental disorder between men and women.

In an educational credentialing world, Richard Pitt takes us deep into an alternative reality--clergy by calling and anointing. A riveting read, this is serious social science that enlightens as it engages.-Michael O. Emerson,
A beautifully written and profoundlysensitive exploration of the meaning of ministry as labor and calling. It stands not only as a highly original empirical treatment of the Church of God in Christ, but as an important theoretical statement in the sociologies of religion and professions. *Stutter and a Stick* will be read and discussed for many years to come.-Omar McRoberts,

About Joan Busfield (University of Essex)

Joan Busfield trained as a clinical psychologist at the Tavistock Clinic in London, and is currently Professor of Sociology at The University of Essex.

GOR010030869
Men, Women & Madness Pb by Joan Busfield (University of Essex)
Joan Busfield (University of Essex)
Used - Very Good
Paperback
New York University Press
1996-05-01
1
0814712819
9780814712818
N/A
Book picture is for illustrative purposes only, actual binding, cover or edition may vary.
This is a used book - there is no escaping the fact it has been read by someone else and it will show signs of wear and previous use. Overall we expect it to be in very good condition, but if you are not entirely satisfied please get in touch with us.