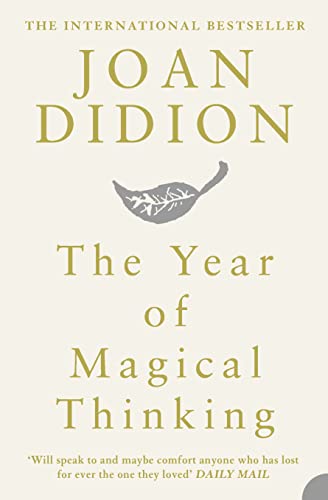 The Year of Magical Thinking
by Joan Didion

From one of America's iconic writers, a portrait of a marriage and a life - in good times and bad - that will speak to anyone who has ever loved a husband or wife or child. A stunning book of electric honesty and passion.

The Year of Magical Thinking Summary

The Year of Magical Thinking by Joan Didion

From one of America's iconic writers, a portrait of a marriage and a life - in good times and bad - that will speak to anyone who has ever loved a husband or wife or child. A stunning book of electric honesty and passion.

Several days before Christmas 2003, John Gregory Dunne and Joan Didion saw their only daughter, Quintana, fall ill. At first they thought it was flu, then pneumonia, then complete sceptic shock. She was put into an induced coma and placed on life support. Days later - the night before New Year's Eve -the Dunnes were just sitting down to dinner after visiting the hospital when John suffered a massive and fatal coronary. In a second, this close, symbiotic partnership of 40 years was over. Four weeks later, their daughter pulled through. Two months after that, arriving at LA airport, she collapsed and underwent six hours of brain surgery at UCLA Medical Centre to relieve a massive hematoma.

This powerful book is Didion's `attempt to make sense of the weeks and then months that cut loose any fixed idea I ever had about death, about illness ... about marriage and children and memory ... about the shallowness of sanity, about life itself'. The result is an exploration of an intensely personal yet universal experience: a portrait of a marriage, and a life, in good times and bad.

The Year of Magical Thinking Reviews

`It is the most awesome performance of both participating in, and watching, an event. Even though Didion does not allow herself to break down, only a terribly controlled reader will resist doing the same.' John Freeman, Independent

`Ultimately, and unexpectedly for a book about illness and death, this is a wonderfully life affirming book.' Lisa O'Kelly, Observer

`This is a beautiful and devastating book by one of the finest writers we have. Didion has always been a precise, humane and meticulously truthful writer, but on the subject of death she becomes essential.' Zadie Smith

`Taking the reader to places where they would not otherwise go is one of the things a really good book can do. "The Year of Magical Thinking" does just that, and brilliantly. Powerful, moving and true.' Cressida Connolly, Spectator

Joan Didion was born in California and lives in New York. She is the author of five novels and seven previous books of nonfiction: among them the great portraits of a decade in essays, `Sentimental Journeys', `The White Album', and `Slouching Towards Bethlehem'.

GOR001141900
The Year of Magical Thinking by Joan Didion
Joan Didion
Used - Very Good
Paperback
HarperCollins Publishers
2006-09-04
240
0007216858
9780007216857
N/A
Book picture is for illustrative purposes only, actual binding, cover or edition may vary.
This is a used book - there is no escaping the fact it has been read by someone else and it will show signs of wear and previous use. Overall we expect it to be in very good condition, but if you are not entirely satisfied please get in touch with us.