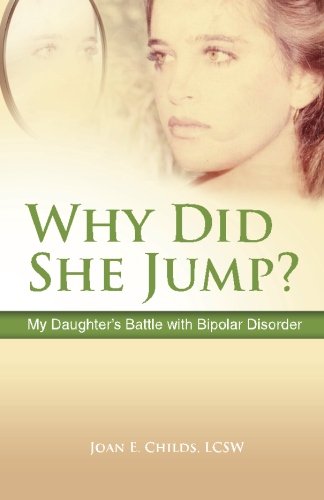 Why Did She Jump? by Joan E. Childs

Why Did She Jump?: My Daughter's Battle with Bipolar Disorder by Joan E. Childs

There is one day in Joan Child's life that she wishes she could do over: the day her daughter Pam, a brilliant psychotherapist, plunged from a fifteen-story building to her death. But despite the coroner's report of a suicide, Childs explains why her daughter's life was taken by the most unforgiving of executioners: bipolar disorder. It was the delusions, not her daughter, who made the final decision.

Why Did She Jump? is an intimate, uncompromising delve into one mother's search for peace amid the chaos surrounding her daughter's tragic death, and a masterful recounting of the events leading up to the fateful day, lifting the veil of shame and secrecy to forge a path to understand bipolar disorder and other mental illnesses.

Ironically, both Pam and Joan were noted psychotherapists, and yet, even with their credentials and medical knowledge, Pam still could not be saved. In heartrending prose, Joan recounts the vivid memories of Pam's life--the extreme highs and lows; the many red flags that were missed by well-meaning parents and overburdened medical systems; how her daughter toggled both worlds as a brilliant therapist who healed unreachable patients as she was unraveling herself; and how she fooled everyone into thinking she was stable.

With searing honesty and reflective insights as a mother and a professional, Childs chronicles how she rose above the quagmire of grief that almost consumed her, and how she mended her broken family and her broken heart. By revealing how she learned to forgive herself and her daughter and finally let go, Childs offers a rallying cry of support for anyone going through a similar struggle. Why Did She Jump? is a cathartic read for anyone who has ever loved or lost deeply, proving that the most brilliant lights in our lives can never be dimmed.

Joan E. Childs, LCSW, (Ft. Lauderdale, FL) has maintained a private clinical practice specializing in individual, couple, family and group therapy since 1978. She was the first affiliate of the John Bradshaw Center in the U.S. trained in the use of The Transformation Model for Original Pain Work and Inner Child Work. In addition, she is a certified hypnotherapist, master level Neuro-linguistic practitioner, Certified EMDR (Eye Movement Desensitization and Re-Processing practitioner, PAIRS (Practical Applications for Intimate Relationship Skills) Leader, Certified Grief Counselor and presently working with couples specializing in Encounter Centered Couples Therapy. Joan has appeared before live audiences and on many national television shows, including Oprah. She presents workshops, seminars and lectures for both corporations and the public.
GOR010956922
Why Did She Jump?: My Daughter's Battle with Bipolar Disorder by Joan E. Childs
Joan E. Childs
Used - Very Good
Paperback
Health Communications
2014-06-16
264
0757316972
9780757316975
N/A
Book picture is for illustrative purposes only, actual binding, cover or edition may vary.
This is a used book - there is no escaping the fact it has been read by someone else and it will show signs of wear and previous use. Overall we expect it to be in very good condition, but if you are not entirely satisfied please get in touch with us
Trustpilot