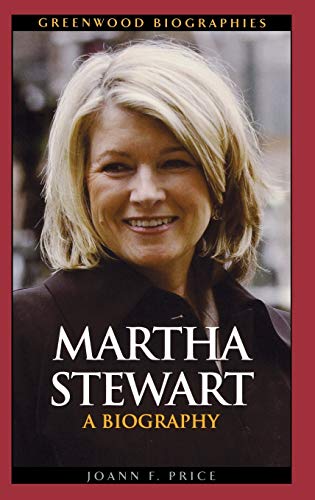 In Stock
$35.99
+10% GST
She's known as a diva of domesticity, an entrepreneur, and a media magnate. To her fans, Martha Stewart is a domestic goddess, the do-it-yourself doyenne. To her detractors, she's taken women backwards, espousing an unobtainable ideal. This book provides a portrait of Martha Stewart's professional and personal life.
Well Read
Only 1 left

In our fame-crazed culture, she's known as a diva of domesticity, entrepreneur, media magnate, and a living brand. She has legions of fans and at the same time, many detractors. To her fans, Martha Stewart is a homemaking maven, the do-it-yourself doyenne. To her detractors, she's taken the American woman backwards, espousing an unobtainable ideal. Love her or hate her, this much is true: Martha Stewart is a self-made woman who has risen from her modest upbringing to become one of the most successful and wealthiest businesswomen in history. This intriguing biography provides a balanced portrait of Martha Stewart's professional and personal life, from her childhood as the oldest daughter in a family of six children to her brief career as a securities trader, to becoming a bestselling author in the 1980s and CEO of Martha Stewart Living Omnimedia in the 1990s. At the height of her power, Stewart was convicted of lying to investigators about a stock sale. Author Joanne F. Price documents the twists and turns of the trial, Stewart's five-month prison term, the highly publicized comeback following her release from prison in March 2005.

"Whether they love her, loathe her, or just admit to swiping a few of her recipes once in a while, most will admit that she sets the standards for middle-class domesticity in America, however impossible that standard is to achieve. Price writes for high school and general readers in this balanced treatment that gives Stewart her due without glossing over the highly-publicized details. She describes Stewart's rise from an owner of a catering business conducted from her home to an author, media guru, tastemaker and captain of industry, and her apparent success at overcoming her conviction and stretch in prison. Price stays clear of gossip and sticks to the facts, giving a full report of Stewart's trial as well as her real influence on the tastes of the great unwashed." - Reference & Research Book News

Joann F. Price is a writing coach and instructor at Metropolitan State College of Denver.

GOR009698501
Martha Stewart: A Biography by Joann F. Price
Joann F. Price
Greenwood Biographies
Used - Well Read
Hardback
ABC-CLIO
2007-06-30
168
0313338930
9780313338939
N/A
Book picture is for illustrative purposes only, actual binding, cover or edition may vary.
This is a used book - there is no escaping the fact it has been read by someone else and it will show signs of wear and previous use. Overall we expect it to be in very good condition, but if you are not entirely satisfied please get in touch with us.