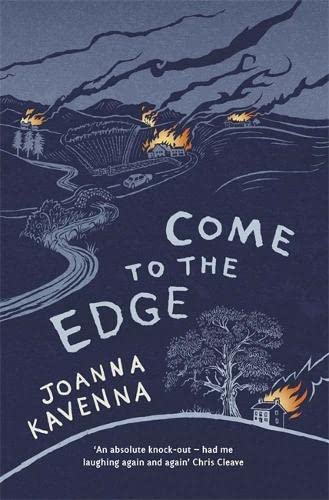 Come to the Edge
by Joanna Kavenna

Used Price
$15.49
inc. GST
Free Shipping in Australia
She didn't mean to become a revolutionary. She thought she was going on a rural retreat.
Reviews:
Trustpilot
Like New Very Good Good

Come to the Edge Summary

Come to the Edge by Joanna Kavenna

A narrator in retreat from suburban life, a shambolic draughty farmhouse in a scenic valley...A widowed survivalist called Cassandra White...A banker, a village-full of empty second homes, and scores of poor and elderly people with nowhere to go...A crazy utopian scheme to reclaim the valley for the locals. A dark, timely satire from Joanna Kavenna, the prize-winning author of Inglorious and The Birth of Love...

Customer Reviews - Come to the Edge

Come to the Edge Reviews

'Kavenna is a fantastically hilarious writer with scepticism, irony and venom pouring out of her fingertips' Avrupa. * Avrupa *
'An absolute knock-out - had me laughing again and again' Chris Cleave. * Chris Cleave *
'a short, sharp shock of a read, darkly funny and enjoying a satirical poke at the impracticability and earnestness of some anti-capitalists' Country Life magazine. * Country Life magazine *
'A resonance of mental instability thrums throughout as Kavenna probes received notions of justice and equality, property and rights, in this often hilarious and fast-paced tale of rural revolt' Independent. * Independent *
'Kavenna's comedy is effortless, brilliant and occasionally savage' Literary Review. * Literary Review *
'Kavenna writes as if possessed, as if on a mission, as if she had been taken over by her wonderful, impossible, dynamic leading character ... This is a novel to read at speed, laughing all the way to the edge' Observer. * Observer *
'crackles and sparkles and will have you chuckling on every page' Red Online. * Red Online *
'sharp, neat, well written and darkly comic' Telegraph. * Telegraph *
'Oh my aching sides ... Laugh? I nearly exploded reading Kavenna's knock-out satire on alternative lifestyle' Daily Mail. * Daily Mail *

Joanna Kavenna is the author of The Ice Museum, Inglorious (which won the Orange Prize for New Writing), The Birth of Love, Come to the Edge and A Field Guide to Reality. Her writing has appeared in the New Yorker, Guardian, Observer, Telegraph, Spectator, London Review of Books and New York Times and she has held writing fellowships at St Antony's College Oxford and St John's College Cambridge. In 2011 she was named as one of the Telegraph's 20 Writers Under 40 and in 2013 was listed as one of Granta's Best of Young British Novelists. She lives in Oxfordshire.

GOR010798145
Come to the Edge by Joanna Kavenna
Joanna Kavenna
Used - Like New
Hardback
Quercus Publishing
2012-06-27
288
1780872135
9781780872131
N/A
Book picture is for illustrative purposes only, actual binding, cover or edition may vary.
The book has been read, but looks new. The book cover has no visible wear, and the dust jacket is included if applicable. No missing or damaged pages, no tears, possible very minimal creasing, no underlining or highlighting of text, and no writing in the margins.