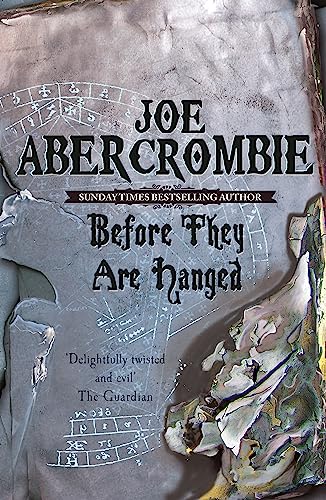 Before They Are Hanged
by Joe Abercrombie

Before They Are Hanged Summary

Before They Are Hanged: Book Two by Joe Abercrombie

Bitter and merciless war is coming to the frozen north. It's bloody and dangerous and the Union army, split by politics and hamstrung by incompetence, is utterly unprepared for the slaughter that's coming. Lacking experience, training, and in some cases even weapons the army is scarcely equipped to repel Bethod's scouts, let alone the cream of his forces.

In the heat-ravaged south the Gurkish are massing to assault the city of Dagoska, defended by Inquisitor Glokta. The city is braced for the inevitable defeat and massacre to come, preparations are made to make the Gurkish pay for every inch of land ... but a plot is festering to hand the city to its beseigers without a fight, and the previous Inquisitor of Dagoska vanished without trace. Threatened from within and without the city, Glokta needs answers, and he needs them soon.

And to the east a small band of malefactors travel to the edge of the world to reclaim a device from history - a Seed, hidden for generations - with tremendous destructive potential. A device which could put a end to war, to the army of Eaters in the South, to the invasion of Shanka from the North - but only if it can be found, and only if its power can be controlled ...

Before They Are Hanged Reviews

Highly recommended - a funny, finely-wrought, terrifically energetic work of high fantasy. Seek it out -- Joe Hill
Before They Are Hanged is an excellent sequel from an author writing compelling, character-driven, adult fantasy, for readers who want to be entertained as well as challenged. * SFF WORLD *
In my opinion, Joe Abercrombie possesses all the qualities that made David Eddings such a powerhouse during the 80s and 90s. Before They Are Hanged is a satisfying sequel which should establish Joe Abercrombie as one of the bright new voices of the genre. * FANTASY HOT LIST *
Before They Are Hanged grabs you and drags you along. * SFF SITE *
Dark, deeply ironic and full of character gems that will appeal to your cynical side, Before They Are Hanged is as brilliant as its predecessor. -- John Berlyne * SF REVU *
"We're right there in the heads of these dudes, thanks to the author's style of showcasing their thoughts. His knowing turn of phrase means that situations often appear ironic, with peripheral characters verging on the Dickensian. This follow-up is crammed with unexpected betrayals, murders and liaisons, often catching us off guard." -- Dave Bradley * SFX *

Joe Abercrombie is the author of the First Law Trilogy (The Blade Itself, Before They Are Hanged and Last Argument of Kings). His standalone novels (Best Served Cold, The Heroes and Red Country) are also set in the First Law world. His novels have been shortlisted for the World Fantasy Awards, British Fantasy Awards, John W. Campbell Award and the David Gemmell Legend Awards. His covers are also award winning, and have won both the David Gemmell Legend Award and the World Fantasy Award for best artwork. Joe formerly worked as a freelance film editor and is now a full time writer who lives in Bath with his family. Follow @LordGrimdark on twitter for more information, or visit www.joeabercrombie.com.

GOR001269088
Before They Are Hanged: Book Two by Joe Abercrombie
Joe Abercrombie
The First Law
Used - Very Good
Paperback
Orion Publishing Co
2008-03-13
592
0575082011
9780575082014
N/A
Book picture is for illustrative purposes only, actual binding, cover or edition may vary.
This is a used book - there is no escaping the fact it has been read by someone else and it will show signs of wear and previous use. Overall we expect it to be in very good condition, but if you are not entirely satisfied please get in touch with us.