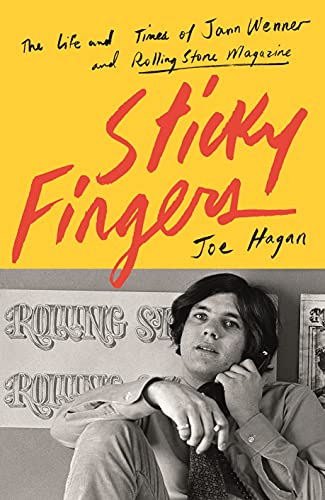 Tells the story of Jann Wenner, Rolling Stone's founder, editor, and publisher. This title takes you through the backstages of concert venues, rock-star hotel rooms, and the political ups and downs of the latter half of the Twentieth Century, right up through the digital age: connecting the counterculture of Haight Ashbury to the straight world.

Sticky Fingers: The Life and Times of Jann Wenner and Rolling Stone Magazine by Joe Hagan

Shortlisted for the Penderyn Music Book Prize Sticky Fingers is the story of how one man's ego and ambition captured the 1960s youth culture of rock and roll and turned it into a hothouse of fame, power, politics, and riches that would last for fifty years. Drawn from dozens of hours of interviews with Jann Wenner, who granted Joe Hagan exclusive access to his vast personal archive, this biography reveals how Wenner manufactured an unforgettable cultural mythology in story and image every other week for five decades. Hagan captures in stunning detail the extraordi-nary stories behind Rolling Stone, the magazine that reinvented youth culture, and marketed the libertine world of late-sixties San Francisco. He chronicles Wenner's marksmanship as an editor, his instinctive un-derstanding of the zeitgeist, his endless pursuit of fame and power and his capacity for betrayal that would earn him as many enemies as friends. Featuring on-the-record interviews with Mick Jagger, Bruce Springsteen, Paul McCartney, Elton John, Keith Richards, Pete Townsend, Yoko Ono, Billy Joel, Tom Wolfe, Cameron Crowe, Lorne Michaels, David Geffen, Dan Aykroyd, Bette Midler, and many others, Hagan describes Wenner with intimacy, nuance, and complexity. Like a real life Clash of the Titans, Sticky Fingers captures the spirit of the age and paints an unforgettable portrait of one of the most signif-icant cultural forces of our time.
A wild blast from a vanishing past ... a magnificent monument to the magazine's life and changing times -- Victoria Segal * * Sunday Times * *
Offers a fascinating insight into the relationship between Wenner, his writers and some of the most storied musicians and celebrities of the late 20th century * * Guardian * *
A sprawling rollercoaster of a book - insightful, revelatory, sometimes lurid, and never less than utterly compelling * * The Telegraph * *
One of the music books of the year * * Mail on Sunday * *
A surprisingly honest portrait of a controversial rock publisher . . . The pages sizzle with the sex and drug-fuelled tales of Hunter Thompson, Annie Leibovitz and Joe Eszterhas. Yet, the through-line remains the complex relationship between Jann and Jane Wenner . . . a profile with real bite * * Mojo * *
Overflowing with sex, drugs and John Lennon's wrath . . . the wildest story he never printed - his own * * GQ * *
A joy to read and ... built to last -- Dwight Garner * * New York Times * *
A terrific, sometimes comic portrait of a music biz mogul * * Guardian * *
Explains, in detail both exhaustive and fascinating, how Wenner went about defining rock stardom, and how he pursued a form of it himself, turning himself into the social equal of those his magazine covered * * Financial Times * *
Explosive ... jaw-dropping ... wildly entertaining ... delicious and meticulous * * USA Today * *
[A] must-read . . . An irreverent and colourful biography of the founder of Rolling Stone * * Sunday Times * *
Compelling and sobering * * Observer * *
[A] colourful, hefty, action-packed read * * RTE * *
Startlingly candid . . . As a portrait of the work ethic and machinations of a true wunderkind coping with the changes in pop music . . . it makes for gripping reading . . . revelatory but never prurient * * The Wee Review * *
What a fuckin' editor. He's crazy, but he's got a dream -- Hunter S. Thompson
He's a huge music fan. That's something that has never changed. It's a big part of who he is. And that's at the basis of our relationship. He still gets into the records like we used to get into the records -- Bruce Springsteen
I'll tell you what Jann did. He put together a really good gang of writers, nice kids. Not afraid to go and ask questions. And turned something that could have just been a fan magazine into a real piece of journalism. That's what I think Jann did -- Keith Richards
It was clear to me that Jann, like myself, was growing up in a world surrounded by people who were often out of their minds on drugs, and equally out of their minds on conspira-cy theories and rhetoric. All we had to do was enjoy the company and carefully steer the journey, and we might survive; standing on a pile of corpses perhaps, but having survived -- Pete Townshend
He leads with his appetites - I take, I see, I have -- Art Garfunkel
Jann likes sexual power, and if you're do-ing what he's doing, and you're in this business, how could you not be interested in that? -- Annie Leibovitz
Wenner thinks like a water moccasin -- Truman Capote
Well, you've chosen a fairly big subject there with Jann. It's a complicated life. He's lived a big, big life -- Lorne Michaels
I was intimidated by Jann . . . Not because he was a nasty or snobbish person, but because he founded something so great -- Elton John
He and Billy Joel used to sing Gilbert and Sullivan on the backs of their motorcycles. I'm like, "Really?" -- Bette Midler
Joe Hagan has written for New York, Rolling Stone, The Wall Street Journal, and many other publica-tions. He has published long-form profiles and investiga-tive exposes of some of the most significant figures and subjects of our time, including Hillary Clinton (her first post-secretary of state interview), Karl Rove, the Bush family, Henry Kissinger, Dan Rather, Goldman Sachs, The New York Times, and Twitter. He lives with his family in Tivoli, New York. joehagan.net
GOR008848577
9781782115892
1782115897
Sticky Fingers: The Life and Times of Jann Wenner and Rolling Stone Magazine by Joe Hagan
Joe Hagan
Used - Very Good
Hardback
Canongate Books Ltd
2017-10-24
560
Short-listed for Penderyn Music Book Prize 2018 (UK)
Book picture is for illustrative purposes only, actual binding, cover or edition may vary.
This is a used book - there is no escaping the fact it has been read by someone else and it will show signs of wear and previous use. Overall we expect it to be in very good condition, but if you are not entirely satisfied please get in touch with us
Trustpilot