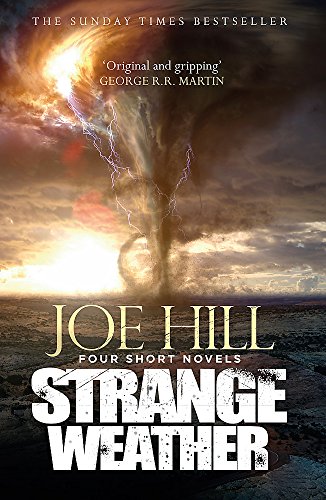 Four short novels from the author of THE FIREMAN and HORNS, ranging from creepy horror to powerful explorations of our society.

One autumnal day in Boulder, Colorado, the clouds open up in a downpour of nails, splinters of bright crystal that tear apart anyone who isn't safely under cover. 'Rain' explores this escalating apocalyptic event, as clouds of nails spread out across the country and the world. Amidst the chaos, a girl studying law enforcement takes it upon herself to resolve a series of almost trivial mysteries . . . apparently harmless puzzles that turn out to have lethal answers.

In 'Loaded' a mall security guard heroically stops a mass shooting and becomes a hero to the modern gun movement. Under the hot glare of the spotlights, though, his story begins to unravel, taking his sanity with it...

'Snapshot, 1988' tells the story of an kid in Silicon Valley who finds himself threatened by The Phoenician, a tattooed thug who possesses a Polaroid that can steal memories...

And in 'Aloft' a young man takes to the skies to experience parachuting for the first time . . . and winds up a castaway on an impossibly solid cloud, a Prospero's island of roiling vapour that seems animated by a mind of its own.

If you haven't yet grabbed a copy of Joe Hill's THE FIREMAN, you need to. Original and gripping, a page-turner * George R.R.Martin *
In these four novellas, Joe Hill shows himself to be a high-concept ubermaster. From a single idea, he weaves brilliantly inventive and character-driven stories that enthral and thrill. -- Jamie Buxton * Daily Mail *

I devoured this book as if the pages themselves were on fire...an end of the world
tale with a blazing heart of hope at its core. A contender for book of the year

* Sarah Pinborough, author of 13 MINUTES *
Hill really embraces the shorter format to really grab the reader by the throat. This is a must. -- SFX
Joe Hill really could set the world on fire with this book: cleverly imagined and a compulsive read * Katherine Cowdrey, The Bookseller *

Joe Hill has always been good, but he's created something incandescent here,
soaring and original. He's a master storyteller who writes with fire in his veins

* Lauren Beukes, author of Broken Monsters *
'Very well-drawn characters, some serious shocks, a great sense of humour and a willingness to break hearts as well as raise pulse rates.' * SciFiNow *
I would put money on this being huge. Can't put it down * Sam Baker, The Pool *
You'll be instantly hooked if you're obsessed with The Walking Dead. It's got the whole post-apocalyptic world nailed...there is a brilliant humour amid the darkness, and the action scenes feel like a movie * Cosmopolitan *
Taps into fears we all have about the world coming to an end, as Donald Trump stokes the fires of racial hatred in America, wars continue across the planet and diseases such as Zika and Ebola spread with shocking speed. * The Mail on Sunday *
Hill's writing has matured along with his ideas. He plays out the apocalypse so quickly and efficiently, through small-town witnesses and television broadcasts, that it feels absolutely devastating. And in the aftermath, he juggles a huge cast of characters with aplomb, giving each their time to shine, yet still managing to keep the tension high throughout * The Guardian *
Original, compulsive and very frightening * Woman & Home *
Clever - but The Fireman isn't just clever, it's also a book with real soul... the deeper truths of The Fireman lie in the way it explores how we slowly build connections with those closest to us...a brave, bold and big hearted take on the end of the world * SFX *
Set to blaze through bestsellers lists....exhilarating * Stuff *
Beautiful and aching and striking, a poignant exploration of human relationships and an ode to the simple things * Ars Technica *
A Lord of the Flies for the Twitter generation. Clever, gripping and packs a hell of a punch * Joanne Harris *
Ominously superb * Nick Harkaway *
This book is incredible * Lev Grossman *
Joe Hill (aka Stephen King Jnr) proves he's a chip off the old block with this epic post-apocalyptic adventure * The Sunday Mirror *
The Fireman by Joe Hill is a thrilling, long-lingering, morally-striking book that set my heart and mind alight. A must read. * Delve into Dystopia *
Breathless adventures, pulsing emotions, things that go bump in the night and so much more, with surprises lurking on the corner of every page * Lovereading.co.uk *
This is a huge cauldron of a novel that pulses with life, hope and decency as well as extreme fear and constant devastation * BestChickLit.co.uk *
The Fireman is a large book but you hardly notice the pages turning and you certainly wouldn't want to rush it. There are moments of extreme and violent action, fought by real people, there are other passages that are so evocative, memorable and beautifully written, with characters to match. There are also jawdropping moments. It's the most atmospheric read I've had in a long time. * For Winter's Nights *

Even though The Fireman is primarily an Apocalyptica, the human issues of corrupt power, personal strength, family, friendship and forgiveness added a level that enhanced my ability to feel invested in the story.

Forget The Walking Dead- a book where you actually care for the characters' survival, The Fireman is the next big thing in Dystopian Fiction.

* The Book Addict *
this is a book about engagement with the world, about love, and about the need to survive in the worst of circumstances. Hill has been well known in the genre community for a while now, but I'd love to see him break out with this one. It's a terrific book, one which deserves to be read. * The Afterword *
In our opinion, this book is right up there with the likes of Swan Song, Blood Crazy and, yes, even The Stand. (Yup, we went there, it's that damn good.) * The Eloquent Page *
The Fireman is an exceptional novel, it's moving and thoughtful, drawing you in and not letting you go right up to the superb ending. It's an engaging, emotional journey written by a master of their craft. * SF Book *
Hill creates a fast paced thriller, with twists in every chapter * The Sunday Express *
A Fantastically compelling read, Hill making the end of the world into a real and visceral thing with the deftest of touches. * OBSERVER *
The book most likely to be spotted on sun loungers this Summer... a gripping end-of-the-world epic. * GOOD HOUSEKEEPING *
This is a book that starts with a bang and then relentlessly builds. Joe managed to make my skin crawl in the first chapter, turning what should be a time for celebration into something decidedly creepy. At the mid-point of a lengthy book it became near un-putdownable, in that horrifying 'can't look away from a car crash' kind of way. Although the details are dark and even horrible, the narrative pull is relentless and unstoppable. -- Mark Yon * SFFWORLD.COM *
Take the ideas, characters, and tone of Station Eleven (2014) and add a large helping of the action, villains, and unrelenting menace from Doctor Sleep (2013) and you have The Fireman, an excellent example of the very best that genre fiction has to offer readers today -- Booklist
Like his father, Stephen King, Hill has a talent for depicting fascinating characters caught in terrible situations . . . With a full cast of characters and multiple story lines to keep the reader hooked, Hill's enthralling fourth thriller hits another home run -- Starred Library Journal Review

Joe Hill has always been good, but he's created something incandescent here,
soaring and original. He's a master storyteller who writes with fire in his veins

* Lauren Beukes, author of Broken Monsters *
Every decade must have a great story of how we fail, how our society comes apart. Joe Hill has just written ours - which makes us all refugees seeking a safe haven in the wreckage of a world made brutal and hostile. Ominously superb * Nick Harkaway *
If you haven't yet grabbed a copy of Joe Hill's THE FIREMAN, you need to. Original and gripping, a page-turner * George R. R. Martin *

Joe Hill is a recipient of the Ray Bradbury Fellowship and the winner of the A.E. Coppard Long Fiction Prize, William Crawford, World Fantasy, British Fantasy, Bram Stoker and International Horror Guild Awards. His short fiction has appeared in literary, mystery and horror collections and magazines in Britain and America.

GOR009273289
Strange Weather by Joe Hill
Joe Hill
Used - Very Good
Paperback
Orion Publishing Co
2017-10-31
448
1473221188
9781473221185
N/A
Book picture is for illustrative purposes only, actual binding, cover or edition may vary.
This is a used book - there is no escaping the fact it has been read by someone else and it will show signs of wear and previous use. Overall we expect it to be in very good condition, but if you are not entirely satisfied please get in touch with us.