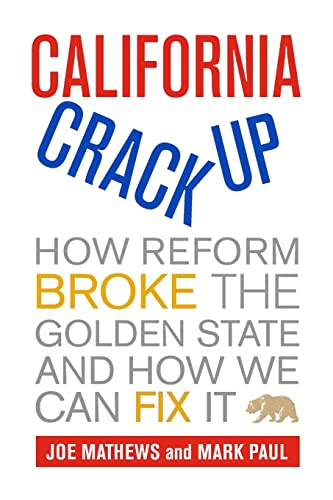 In Stock
$12.99
+10% GST
Exposes the constitutional origins of our political and economic problems and furnishes a California fix: innovative solutions that allow Californians to debate their choices, settle on the best ones, hold elected officials accountable for results, and choose anew if something doesn't work.
Very Good
Only 1 left

California Crackup: How Reform Broke the Golden State and How We Can Fix It by Joe Mathews

Is California beyond repair? A sizable number of Golden State citizens have concluded that it is. Incessant budget crises plus a government paralyzed by partisan gridlock have led to demands for reform, even a constitutional convention. But what, exactly, is wrong and how can we fix it? In "California Crackup", Joe Mathews and Mark Paul provide clear and informed answers. Their fast-paced and often humorous narrative deftly exposes the constitutional origins of our current political and economic problems and furnishes a uniquely California fix: innovative solutions that allow Californians to debate their choices, settle on the best ones, hold elected officials accountable for results, and choose anew if something doesn't work.

"Both [California gubernatorial] candidates may want to read the book's diagnosis of the potentially terminal problems that one of them is certain to inherit." -- Troy Senik Wall Street Journal "A timely book with a lot of important things to say." Newsweek "Lucid analysis is spiked with wit and appealing turns of phrase that lift it above mere wonkery." San Francisco Magazine "Two of the shrewdest California-ologists now practicing ... Mathews and Paul provide the best explanation we've yet had of the scope and sources of the state's governmental dysfunctionality." -- Harold Meyerson American Prospect "An eminently readable treatise on our state's flailing government." -- Aaron Sankin SF Appeal "A compelling book." -- Michael Lewis Vanity Fair Magazine "A smart, good read." -- Jerry Roberts Santa Barbara Independent "If you are interested in improving government-you should read the book ... it reflects the spirit of innovation that was once part of the California story. This is what the campaign for governor should have been about." -- Bill Boyarsky Truthdig "A concise and lucid analysis." -- Byron Williams Oakland Tribune "Objective and at times humorous (if that's possible) analysis of how California grew dysfunctional and what will make it functional again. This new release is getting solid reviews from critics and readers alike." -- Jim Wood Marin Magazine "The authors do a great job of explaining what has been done to try to control the [budget] beast and how it became a depressing example of the law of unintended consequences." -- Royal Calkins Monterey County-Herald "A terrific book... Nice work, guys. Calbuzz sez: check it out." Calbuzz "An important new book." -- Harold Meyerson Los Angeles Times "This is a great book; everyone who wants to fix California needs to read it." -- Garrett Gruener California Journal Of Politics And Policy

Joe Mathews is Irvine senior fellow at the New America Foundation as well as a fellow at the Center for Social Cohesion, Arizona State University. He is the author of The People's Machine: Arnold Schwarzenegger and the Rise of Blockbuster Democracy, a columnist for The Daily Beast, a freelance journalist, and associate editor of Zocalo Public Square Mark Paul is senior scholar and deputy director of the California program at the New America Foundation. He was formerly deputy treasurer of California and deputy editorial page editor of the Sacramento Bee. Mathews and Paul are authors of the article "How to Fix a Broken State" in the March 2011 issue of Boom: A Journal of California.

Part I
Building and Breaking California
1. Crisis without Exit
2. History and the Constitution
3. Empowering and Shackling Sacramento
4. From Teachers to Janitors:
Direct Democracy Demotes the Legislature

Part II
The California Fix
5. Budgeting without Shackles
6. The Architecture of Political Frustration
7. Remaking Elections and the Legislature
8. Government from the Bottom Up
9. A More Direct Democracy

GOR010101711
California Crackup: How Reform Broke the Golden State and How We Can Fix It by Joe Mathews
Joe Mathews
Used - Very Good
Paperback
University of California Press
2010-07-02
240
0520266560
9780520266568
N/A
Book picture is for illustrative purposes only, actual binding, cover or edition may vary.
This is a used book - there is no escaping the fact it has been read by someone else and it will show signs of wear and previous use. Overall we expect it to be in very good condition, but if you are not entirely satisfied please get in touch with us.