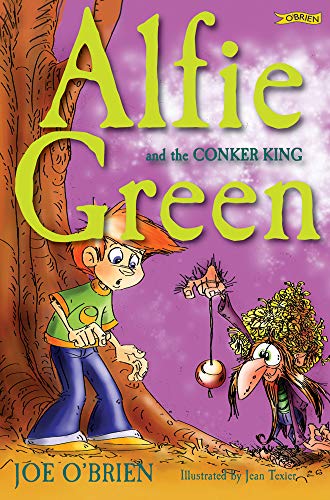 Alfie Green and the Conker King
by Joe O'Brien

It's time for the Budsville Primary School Conker Championship, and Alfie needs to find a special conker.
Alfie Green Book 6

Alfie Green and the Conker King by Joe O'Brien

Alfie would love to win the School Conker Championship. But with Conor Hoolihan on his team and Whacker Walsh cheating all the time, he has no chance. He needs to find a Super Cracking Conker, and he needs to find one fast.

Alfie must travel through the Skeleton Woods of Arcania to find the last great king of the conker warriors.

Will the Conker King part with his winning conker?

'This book is a great choice for boys and girls who are just starting to read for themselves and like a funny story.'

'O'Brien's characteristic mix of adventure, humour and celebration of the natural environment, together with Texier's complementary black and white drawings, should particularly appeal to boys of between 6 and 8, and to reluctant readers of up to 10. The book is beautifully produced: colourful hardback covers, large print, short chapters, which are guaranteed to give young readers a sense of achievement, and endpapers with a superb map of the wonderful world of Alfie Green.'

'Action-packed, full of fantasy and fun and will strike a chord with all boys who have ever played conkers with their friends.'

Joe O'Brien lives in Ballyfermot in Dublin with his wife and children. He is the author of nine books featuring Alfie Green, a boy who can talk to plants. For older readers he has written three books about Danny Wilde and his Littlestown Crokes GAA team, Legends' Lair (about Charlie Stubbs and his dreams of becoming a soccer player) and one fantasy novel, Beyond the Cherry Tree. He has appeared on RTE's The Den, TV3's Ireland AM and many radio shows. He regularly holds readings in bookshops and libraries around the country.

GOR011101307
Alfie Green and the Conker King by Joe O'Brien
Joe O'Brien
Alfie Green
Used - Like New
Paperback
O'Brien Press Ltd
2011-09-05
80
1847172830
9781847172839
N/A
Book picture is for illustrative purposes only, actual binding, cover or edition may vary.
The book has been read, but looks new. The book cover has no visible wear, and the dust jacket is included if applicable. No missing or damaged pages, no tears, possible very minimal creasing, no underlining or highlighting of text, and no writing in the margins.