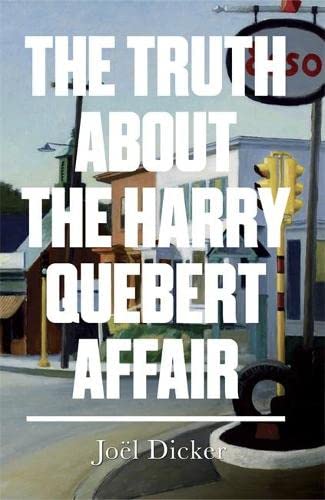 The Truth about the Harry Quebert Affair by Joel Dicker

The Truth about the Harry Quebert Affair by Joel Dicker

August 30, 1975. The day of the disappearance. The day Somerset, New Hampshire, lost its innocence.

That summer, struggling author Harry Quebert fell in love with fifteen-year-old Nola Kellergan. Thirty-three years later, her body is dug up from his yard, along with a manuscript copy of the novel that made him a household name. Quebert is the only suspect.

Marcus Goldman - Quebert's most gifted protege - throws off his writer's block to clear his mentor's name. Solving the case and penning a new bestseller soon merge into one. As his book begins to take on a life of its own, the nation is gripped by the mystery of 'The Girl Who Touched the Heart of America'.

But with Nola, in death as in life, nothing is ever as it seems.

The book of the year -- Simon Mayo
An expertly realised, addictive Russian doll of a whodunnit -- Fanny Blake * Daily Mail *
A top-class literary thriller that smoothly outclasses its rivals -- Melissa Katsoulis * The Times *
Should delight any reader who has felt bereft since finishing Gone Girl, or Stieg Larsson's Millennium Trilogy -- Patricia Nicol * Metro *
It's a terrific story and I'm loving it -- Philip Schofield * Mail on Sunday *
It's like 'Twin Peaks' meets Atonement meets In Cold Blood - the French thriller everyone is talking about -- Gaby Wood * Daily Telegraph *
An intricate murder mystery that could be the read of the summer * Sunday Times *
The tale is expertly told, as unreliable information dances with necessary plot shifts and unexpected moments of catastrophe. An accomplished thriller -- James Runcie * Independent *
Pacy, pleasingly complex and addictive * Good Housekeeping *
Complex, intriguing and highly enjoyable * Heat *
With enough plot twists to fill a truck, it is a racy read * Economist *
Tremendous fun and almost insanely readable -- John Boland * Irish Independent *
Combines literariness with compulsively readable storytelling * G.Q. *
A seductive read . . . well-crafted and highly enjoyable -- Daniel Hahn * Independent on Sunday *
Dicker has the first-rate crime novelist's ability to lead his readers up the garden path . . . An excellent story -- Caroline Jowett * Sunday Express *
Unimpeachably terrific . . . A playful, page-turning whodunit . . . If Norman Mailer had been accused of murder and Truman Capote had collaborated with Dominick Dunne on a tell-all about it, the result might have turned out something like this -- Chelsea Cain * New York Times *
'Powerful and dramatic stuff' Bliss. * Bliss *
Dicker's bestseller features a labyrinthine murder mystery and a book-within-a-book subplot . . . It's energetically written and cleverly constructed. * Mail on Sunday *
'Exciting and moving, intelligent and imaginative ... Demands to be read once at the gallop, and then a second time slowly, savouring the details and relishing its intelligence' Allan Massie, Scotsman. * Scotsman *
'One of the best historical novels of recent years, Greig dusts off the past and presents it with tremendous skill' Kaite Welsh, Literary Review. * Literary Review *
'A triumph of suspense ... what sets Fair Helen above the usual run of historical novels, aside from Greig's extraordinarily deft use of language, is its moral depth, its acute sense of the intricacies of the Border feuds' John Burnside, Guardian. * Guardian *
'Phantoms of Breslau is a cynical, moody thriller which solidifies Krajewski's position as a distinctive voice in contemporary European fiction' Val Nolan, Irish Examiner. * Irish Examiner *
'A classicist at Wroclaw University, Marek Krajewski - in his splendid series of crime novels about inter-war Breslau - disinters this buried metropolis like a fictional archaeologist... Breslau 1919 lives again... If the secret of these deaths lurks in the wartime past, the ritualistic dogma that surrounds them very faintly hints at an equally grim future' Boyd Tonkin, Independent. * Independent *
'Krajewski was lecturer at the University of Wroclaw, and he prides himself on historical accuracy. His Breslau is populated by pimps, prostitutes and cynics, and it isn't hard to believe that the city will one day become one of Hitler's strongholds' Joan Smith, Sunday Times. * Sunday Times *
'Polish author Marek Krajewski does a fine job of conjuring the chaos of Breslau (now the Polish city of Wroclaw), while Mock - a man of conflicts and contradictions - makes for a refreshing protagonist' Fachtna Kelly, Sunday Business Post in Ireland. * Sunday Business Post in Ireland *
No one knew better than Grossman what people are capable of. These stories and essays are one of the cultural monuments of the 20th century' David Herman, New Statesman. * New Statesman *
Joel Dicker was born in Geneva in 1985, where he studied Law. The Truth about the Harry Quebert Affair was nominated for the Prix Goncourt and won the Grand Prix du Roman de l'Academie Francaise and the Prix Goncourt des Lyceens. It has sold more than 3.6 million copies in 42 countries. The Baltimore Boys, at once a prequel and a sequel, has sold more than 750,000 in France. The Truth About the Harry Quebert Affair is now a major SkyWitness series starring Patrick Dempsey.
GOR005735771
9780857053107
0857053108
The Truth about the Harry Quebert Affair by Joel Dicker
Joel Dicker
Used - Very Good
Paperback
Quercus Publishing
2014-05-01
624
Winner of Grand Prix du Roman de l'Academie Francaise 2012 Winner of Prix Goncourt des Lyceens 2012
Book picture is for illustrative purposes only, actual binding, cover or edition may vary.
This is a used book - there is no escaping the fact it has been read by someone else and it will show signs of wear and previous use. Overall we expect it to be in very good condition, but if you are not entirely satisfied please get in touch with us
Trustpilot