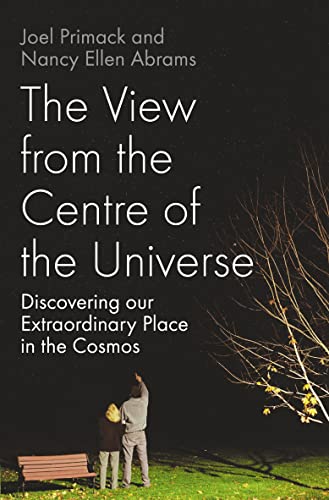 The View From the Centre of the Universe
by Joel Primack

A new, scientifically supported understanding of the universe, one that will forever change our personal relationship with the cosmos.

The View From the Centre of the Universe Summary

The View From the Centre of the Universe: Discovering Our Extraordinary Place in the Cosmos by Joel Primack

A new, scientifically supported understanding of the universe, one that will forever change our personal relationship with the cosmos.

`Joel Primack is one of the pioneers in the development of modern ideas of cosmic evolution... [this] book presents an original synthesis and distinctive perspective on humanity's place in the cosmos.' Martin Rees, Astronmer Royal

Ever since Galileo discovered that Earth is not the centre of the universe, we've thought of `the universe' as either an enormous ice-cold vacuum or a setting for science fiction. Now, thanks to startling discoveries in astronomy and physics, we can see that the universe is far more coherent than anyone ever imagined it to be. For the first time in history, we have the necessary tools, theories and thinking to create a science-based cosmology (the study of the origin and structure of the universe) that explains not only how the universe works but what our place in it really is.

This emerging cosmology explains how the universe operates, what the universe is made of, where it may have come from, how it is evolving and why it makes sense that humans are on Earth at all.

Authors Joel Primack and Nancy Abrams, a world-renowned astrophysicist and a science philosopher, explain these astonishing new ideas in ways that will literally change how we view the world, showing us how intellectually thrilling and intuitively meaningful these new concepts are.

The View From the Centre of the Universe Reviews

'A superb pop-science primer on current cosmology. There are gorgeously clear explanations of relativity, dark matter and the stages of the universe after the Big Bang...Abrams and Primack are on the side of science and narrate its discoveries brilliantly.' The Guardian

`What is remarkable about this book is that it tells the story of the cosmos, tells it with the authority of those who have ingeniously figured it out, and tells it with the clear (and successful) intent of wanting us to understand.' Ronald Hoffmann, Nobel Prize winner, Chemistry

`Joel Primack is not only one of [the USA]'s leading cosmologists, he is also one of the subject's most lyrical and insightful explicators.' Sharon Begley, Science Columnist, Wall Street Journal

`One of the world's leading cosmologists joins forces with a scintillating writer to offer us a scientific vision and a practical yet spiritual philosophy of life. Read this book if you've ever wondered about the perennial questions: "How did it all begin? What does it all mean?"'
Daniel C. Matt, author of `God and the Big Bang'

Joel Primack is an award-winning physics professor at the University of California, Santa Cruz, and is one of the most respected researchers in his field. He was one of the principal originators and developers of the theory of Cold Dark Matter. His wife, Nancy Abrams, is an award-winning science philosopher, as well as a writer, artist and lawyer whose work has appeared in journals, magazines and books.

GOR003580215
The View From the Centre of the Universe: Discovering Our Extraordinary Place in the Cosmos by Joel Primack
Joel Primack
Used - Very Good
Hardback
HarperCollins Publishers
2006-09-18
400
0007193521
9780007193523
N/A
Book picture is for illustrative purposes only, actual binding, cover or edition may vary.
This is a used book - there is no escaping the fact it has been read by someone else and it will show signs of wear and previous use. Overall we expect it to be in very good condition, but if you are not entirely satisfied please get in touch with us.