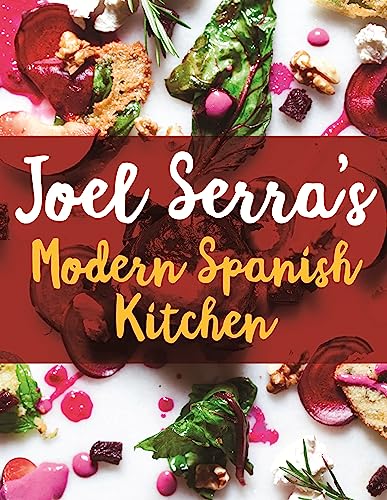 'Food is not what you cook, but what you make others taste.'
Joel Serra Bevin was born in New Zealand and grew up in Tasmania. Inspired by his Catalan great-grandfather, Papa Serra, Joel moved to Barcelona where he has immersed himself in his much-loved Spanish food and cooking.

Joel brings a vibrant, fresh approach to traditional Spanish dishes. He is obsessed with new flavour combinations, unusual preparations and loves to create magic for whoever joins him around the table.

These eighty recipes offer both a beginner's guide to eating and drinking like a local in Barcelona and Spain, with fresh takes on Spanish favourites such as Fideua with Squid Ink, Allioli, Pulpo Gallego and Leche Merengada, as well as plenty of inspiration for those looking to experiment.

While not stinting on classic dishes for those new to Spanish food, Joel also reinvents Catalan classics such as Membrillo-Roasted Pumpkin with Almond Cream, and Green Gazpacho with Sumac Yogurt.

As Joel says, 'Food always tastes better when shared, so pull up a seat and join the feast.'

Funny stories, tasty recipes and creative photos, this book has something for everyone. -- Simon H
If I'm not cooking from this book, I'm drooling over the photos - it's seriously delicious. -- Linda M
I loved this book! Fresh and exciting, I can't wait to see what comes next. -- Anna L
This book is a breath of fresh air for anyone that loves reading about food as much as they love cooking it. -- Javier S
So much passion on every page - this is Spanish food with heart. -- Vanessa B
The book is full of Joel's brilliant Spanish recipes and he has collaborated with Mexican fashion photographer Aldo Chacon, whose irreverent images give the book humour, colour and life, as well as complementing the delicious dishes which have all been shot around the fantastic Spanish city. * Liverpool Echo *

Joel Serra Bevin, also known as Papa Serra Junior, was born in New Zealand and grew up in Tasmania. Even there, off the south coast of mainland Australia, Joel's Spanish heritage found a way into his life, through his stomach, naturally.

He passed eight years working as a suit and tie in Melbourne, while on the weekend he would run a supper club out of his apartment. He also enjoyed fifteen minutes of fame on Masterchef Australia.

Realising he preferred cracking nuts to crunching numbers, Joel left life as a consultant and moved to Barcelona where it was a case of love at first bite. Joel's passion for Spanish food and culture was inevitable - it was in his genes. Papa Serra, his Catalan great-grandfather was no chef, but inspired Joel to return in 2012 where he founded Papa Serra Culinary Adventures for the epicurean traveler, with whom he shared his intoxicating love for Spanish food and cooking.

Having grown up in a multicultrual house, and country, Joel brings a fresh global approach to traditional Spanish dishes. Outside of the kitchen Joel spends his time outdoors and his cooking style naturally incorporates this healthy lifestyle.

Not able to boast of even one tattoo, Joel lives clean and cooks clean but will happily admit that the kitchen raised him. He is obsessed with new flavour combinations, unusual preparations and creating magic for whoever else joins him around the table.

GOR008941574
Joel Serra's Modern Spanish Kitchen by Joel Serra
Joel Serra
Used - Very Good
Hardback
Little, Brown Book Group
2017-08-10
208
1472140265
9781472140265
N/A
Book picture is for illustrative purposes only, actual binding, cover or edition may vary.
This is a used book - there is no escaping the fact it has been read by someone else and it will show signs of wear and previous use. Overall we expect it to be in very good condition, but if you are not entirely satisfied please get in touch with us.