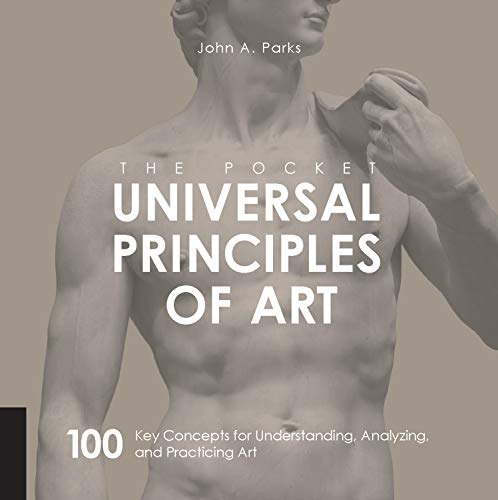 The Pocket Universal Principles of Art
by John A. Parks

The Pocket Universal Principles of Art: 100 Key Concepts for Understanding, Analyzing, and Practicing Art by John A. Parks

This pocket edition presents one hundred principles and fundamental ideas and approaches to making art. The principles explore key techniques and concepts, making this a book for anyone interested in learning more about what makes art work.

About John A. Parks

John A. Parks trained at the Royal College of Art in London in the 1970's and subsequently pursued a career in New York, exhibiting his work with several of the most renowned art galleries in the city. His work has received considerable critical acclaim, including a review in the New York Times by Roberta Smith, the chief art critic. Parks' paintings are represented in a number of museum collections including the Victoria and Albert Museum in London and the Museum of the Rhode Island School of Design. Parks has been a member of the faculty at the School of Visual Arts in New York since 1979 teaching a broad array of courses in painting and drawing at every level, from undergraduate to post-graduate. He has also taught courses for adults for many years amassing wide experience in presenting approaches to making art to people of every background and time of life. In the early 90's Parks began to write for the art magazines using a concise and lucid style that makes his writing highly accessible to a broad audience. He has since written more than 150 feature articles for publications such as American Artist Magazine, Drawing Magazine, Watercolor Magazine as well as pieces for the New York Times. His writing has explored very broad array of subjects, ranging from profiles of contemporary artists such as Lucien Freud and Wayne Thiebaud, to historical figures such as Rubens, Raphael and Whistler. His writings on art technique again cover considerable ground including a major article on the painting technique of Vel\u00e1zquez as well as pieces on quill pen drawing, watercolor and gouache techniques. Parks also published a regular column on the business of art in American Artist Magazine.

Pocket Universal Principles of Art presents one hundred principles, fundamental ideas, and approaches to art making that will guide, challenge, and inspire any artist to make better, more focused art. The book provides a wealth of prompts, hints, insights and roadmaps that will open a world of possibilities to both understanding art works and generating new ones. It covers techniques and concepts, incorporating both historical and contemporary theories of art and art making.

- Color as light: How color is used to recreate the sensation of light.

- Composition: The artwork as an arrangement of elements.

- Harmony: How elements work together for the good of the whole.

- Quoting: How referring to another work of art allows for refinement of meaning.

- Simplification: Reducing a statement to its fundamentals.

- Successive approximation: The artwork as a journey.

- Restraint: The power of holding back.

- Classicism and Renaissance: The tenets of the Greco-Roman world recur throughout the

- Deconstructionism: A critical technique exposes the manipulation of meaning.

- Drawing Language: The syntax of description.

This detailed, yet concise, reference pcoket book will be invaluable for artists, historians, educators, art lovers, and students who seek to broaden and improve their art expertise, enhance their enjoyment, or improve their practice.

GOR010415167
The Pocket Universal Principles of Art: 100 Key Concepts for Understanding, Analyzing, and Practicing Art by John A. Parks
John A. Parks
Used - Like New
Paperback
Rockport Publishers Inc.
2017-10-25
208
1631593730
9781631593734
N/A
Book picture is for illustrative purposes only, actual binding, cover or edition may vary.
The book has been read, but looks new. The book cover has no visible wear, and the dust jacket is included if applicable. No missing or damaged pages, no tears, possible very minimal creasing, no underlining or highlighting of text, and no writing in the margins.