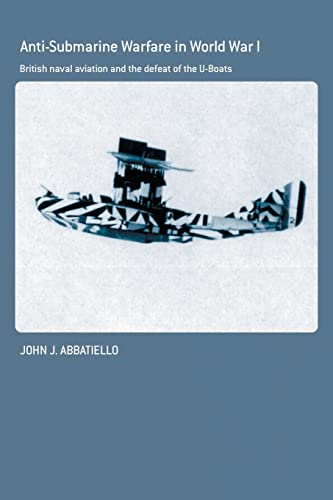 Anti-Submarine Warfare in World War I by John Abbatiello

Anti-Submarine Warfare in World War I: British Naval Aviation and the Defeat of the U-Boats by John Abbatiello

The Royal Naval Air Service invested heavily in aircraft of all types-aeroplanes, seaplanes, airships, and kite balloons-in order to counter the German U-boats. Under the Royal Air Force, the air campaign against U-boats continued uninterrupted. Aircraft bombed German U-boat bases in Flanders, conducted area and 'hunting' patrols around the coasts of Britain, and escorted merchant convoys to safety. Despite the fact that aircraft acting alone destroyed only one U-boat during the war, the overall contribution of naval aviation to foiling U-boat attacks was significant. Only five merchant vessels succumbed to submarine attack when convoyed by a combined air and surface escort during World War I.

This book examines aircraft and weapons technology, aircrew training, and the aircraft production issues that shaped this campaign. Then, a close examination of anti-submarine operations-bombing, patrols, and escort-yields a significantly different judgment from existing interpretations of these operations. This study is the first to take an objective look at the writing and publication of the naval and air official histories as they told the story of naval aviation during the Great War. The author also examines the German view of aircraft effectiveness, through German actions, prisoner interrogations, official histories, and memoirs, to provide a comparative judgment. The conclusion closes with a brief narrative of post-war air anti-submarine developments and a summary of findings.

Overall, the author concludes that despite the challenges of organization, training, and production the employment of aircraft against U-boats was largely successful during the Great War.

This book will be of interest to historians of naval and air power history, as well as students of World War I and military history in general.

NLS9780415512732
9780415512732
0415512735
Anti-Submarine Warfare in World War I: British Naval Aviation and the Defeat of the U-Boats by John Abbatiello
John Abbatiello
Cass Series: Naval Policy and History
New
Paperback
Taylor & Francis Ltd
2011-12-13
256
N/A
Book picture is for illustrative purposes only, actual binding, cover or edition may vary.
This is a new book - be the first to read this copy. With untouched pages and a perfect binding, your brand new copy is ready to be opened for the first time
Trustpilot