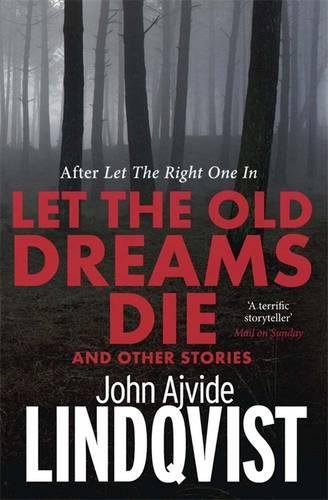 Out of Stock
$51.99
inc. GST
The sequel to Let the Right One In is included in this collection of John Ajvide Lindqvist's short stories.
Very Good
Only 0 left

Whatever happened to Oskar and Eli? And what became of the beleaguered families in Handling the Undead? Find out in Let the Old Dreams Die. In other tales from this collection, a woman finds a dead body and decides to keep it for herself, a customs officer has a mysterious gift which enables him to see what others hide, and a man believes he knows how to deceive death. These are the stories of John Ajvide Lindqvist's rich imagination. They are about love and death and what we do when the two collide and the monsters emerge.

'A compelling voice, a simply brilliant collection from one of the horror genre's best living authors' British Fantasy Society. * British Fantasy Society *
'an example of some of the finest short horror fiction you'll find today' Reader Dad. * Reader Dad *
'Lindqvist has let loose a wayward brood of stories to enthral, unsettle, intrigue and, yes indeed, sometimes scare the living bejeezus out of us' This is Horror. * This is Horror *
'Lindqvist's imagination is full of monsters, and he's brilliant at finding new ways of approaching well-trodden ground. His real talent, though, is the way he writes people' SFX. * SFX *
'Lindqvist's knack for slick story-telling, inventive twists and cinematic set ups means we wouldn't be surprised if Hollywood are back in touch soon' Timeout. * Timeout *
'skilfully put together, a beautifully written masterpiece of subtle power in which every story shines like a dark gem' Fear. * Fear *
'These stories, which are surreal, complex, gives the reader insight into the human psyche ... A stunning collection' Terror-Tree. * Terror-Tree *
'This collection of chilling short stories will have you wishing your DLR journey was just a few pages longer' The Wharf. * Wharf *
'very gripping, soulful and imaginative. It's perhaps the best collection of stories I've read since Clive Barker's Books of Blood' Starburst Magazine. * Starburst Magazine *

John Ajvide Lindqvist is a Swedish author, born in 1968. He grew up in Blackeberg, a suburb of Stockholm. He wanted to become something awful and fantastic. First he became a conjurer and came in second in the Nordic card trick championship. Then he was a stand-up comedian for twelve years, before writing Let the Right One In. That novel became a phenomenal international bestseller and was made into a film and a West End play, both called Let Me In. His books are published in twenty-nine countries worldwide.

Border. Village on the hill. Equinox. Can't see it! It doesn't exist! Substitute. Eternal/Love. Let the old dreams die. To hold you while the music plays. Majken. Paper walls. The final processing. Foreword to the Swedish edition of Let the Old Dreams Die. Afterword.

GOR007187216
Let the Old Dreams Die by John Ajvide Lindqvist
John Ajvide Lindqvist
Used - Very Good
Paperback
Quercus Publishing
2012-08-30
400
085738550X
9780857385505
N/A
Book picture is for illustrative purposes only, actual binding, cover or edition may vary.
This is a used book - there is no escaping the fact it has been read by someone else and it will show signs of wear and previous use. Overall we expect it to be in very good condition, but if you are not entirely satisfied please get in touch with us.