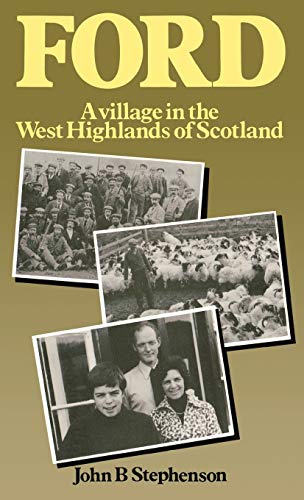 Ford-A Village in the West Highlands of Scotland
by John B. Stephenson

Ford-A Village in the West Highlands of Scotland Summary

Ford-A Village in the West Highlands of Scotland: A Case Study of Repopulation and Social Change in a Small Community by John B. Stephenson

The Highlands of Scotland, like the southern Appalachians of the United States, have long been a problem area in Great Britain, troubled with a fading economy and loss of population. Most books about the region, however, are popular volumes that romanticize a bygone way of life. This study of Ford, a village of some 160 people in western Argyllshire, thus fills a gap in the literature and provides a look at the present realities of Scottish life.Although the Highlands are by no means a homogeneous region, Ford in its size and makeup is perhaps a representative rural settlement. John Stephenson, who conducted extensive interviews in the village during 1981, focuses his study on the theme of survival, on whether this particular village shows signs of enduring as a community of people bound together by common interests and situations. Though necessarily tentative, his conclusions are optimistic. Ford has shown a recent increase in population, consisting almost entirely of newcomers, and though its residents have now a more varied background, they seem to have a sense of place, of belonging to the village.This book will provide new insights not only for those interested in life in the Highlands but also for all those interested in small communities in other parts of the world.

Ford-A Village in the West Highlands of Scotland Reviews

"Captures the essence of social life in small communities operating on the margins of economic and social survival." -- Contemporary Sociology

"This convincing portrait of the concerns of a group of contemporary Scots raises and even answers questions relevant in many other rural areas." -- Choice

About John B. Stephenson

John B. Stephenson is professor of sociology and director of the Appalachian Center at the University of Kentucky, USA.

GOR010398242
Ford-A Village in the West Highlands of Scotland: A Case Study of Repopulation and Social Change in a Small Community by John B. Stephenson
John B. Stephenson
Used - Very Good
Hardback
The University Press of Kentucky
1984-07-30
188
0813115078
9780813115078
N/A
Book picture is for illustrative purposes only, actual binding, cover or edition may vary.
This is a used book - there is no escaping the fact it has been read by someone else and it will show signs of wear and previous use. Overall we expect it to be in very good condition, but if you are not entirely satisfied please get in touch with us.