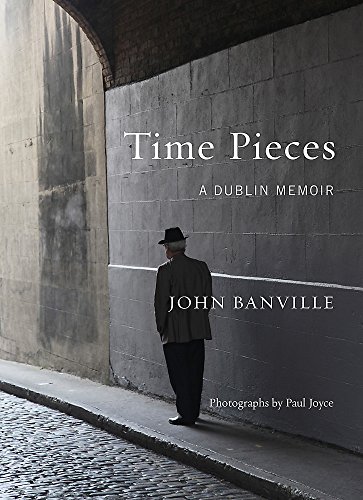 Alternating between vignettes of John Banville's own past, and present-day historical explorations of the city, Time Pieces is a vivid evocation of childhood and memory, that 'bright abyss' in which 'time's alchemy works'.

'A trove of arresting imagery, from the lushly poetic to the luridly absurd ... utterly delightful' Irish Times

'Delicious ... Banville's soarings, like a hawk's, are both wild and comprehensive, taking in everything and imagining more' New York Times

For the young John Banville, Dublin was a place of enchantment and yearning. Each year, on his birthday - the 8th of December, Feast of the Immaculate Conception - he and his mother would journey by train to the capital city, passing frosted pink fields at dawn, to arrive at Westland Row and the beginning of a day's adventures that included much-anticipated trips to Clery's and the Palm Beach ice-cream parlour.

The aspiring writer first came to live in the city when he was eighteen. In a once grand but now dilapidated flat in Upper Mount Street, he wrote and dreamed and hoped.

It was a cold time, for society and for the individual - one the writer would later explore through the famed Benjamin Black protagonist Quirke - but underneath the seeming permafrost a thaw was setting in, and Ireland was beginning to change.

Alternating between vignettes of Banville's own past, and present-day historical explorations of the city, Time Pieces is a vivid evocation of childhood and memory - that 'bright abyss' in which 'time's alchemy works' - and a tender and powerful ode to a formative time and place for the artist as a young man.

Accompanied by images of the city by photographer Paul Joyce.

Banville is the greatest living master of simile and metaphor in prose, and Time Pieces is a trove of arresting imagery, from the lushly poetic to the luridly absurd ... [An] utterly delightful book' * Irish Times *
John Banville's self-portrait evokes the hard-hearted, heartbroken anti-heroes of his fiction. Although Time Pieces excavates some of Dublin's key moments and periods ... its real speciality is in capturing the more abstract romance of city life. Banville is an expert in melancholy urban phenomena: the pleasures of dilapidation and overgrown parklands, the long-gone, gaudy shops of one's past that blaze in the memory * Financial Times *
A beautifully crafted, carefully shaped work of art ... [Banville] has written beautifully - in Time Pieces no less than in his extraordinary novels * Sunday Business Post *
It's the author's love letter to a city he first encountered on annual excursions with his mother from the Wexford of his birth and upbringing. And, as such, it's extraordinarily evocative of a not-quite-vanished metropolis ... it's in his vivid reminiscences of Dublin in the 1950s and early 1960s that the book finds its true heart * Irish Independent *
A moving paean to the city that helped shape the artist as a young man * Image magazine *
[an] intriguing blend of reminiscence and quirky guide to some of the capital's enduring treasures * Irish Independent *
Handsomely published ... for those who know Dublin, or dream of it from afar, there will be much in Time Pieces that is delightful. Rich with lived experience and the pining for things past, in more sense than one it is a book John Banville has been waiting his whole life to write * Sunday Times *
John Banville treats the business of memoir with the elegance of a practised flaneur, weaving into his personal tale a portrait of the Dublin he discovered on boyhood visits from Wexford in the 1950s ... Dublin's streets, squares, gardens and gateways, beautifully photographed by Paul Joyce, reflect the writer's own lost past, early experiences and first love. But the surprise, perhaps, is in the recurrent plangent note of regret or self-criticism. This is what makes Time Pieces an oddly affecting book * TLS *
Being led around the streets and dim back warrens of Dublin by the prodigious and endlessly amused-'n'-amusing John Banville is a literary hop-on-hop-off not to be missed. The sentences alone in Time Pieces: A Dublin Memoir are worth your ticket. -- Richard Ford * Financial Times *
If you're interested in Dublin, or if you're interested in the novelist John Banville, or if you're interested in radiantly superb sentences about whatever - I'm all three - then Time Pieces: A Dublin Memoir (Hachette Ireland) is a book you'll not be able to put down * The Guardian *

John Banville (Author)
John Banville is an Irish novelist, an adapter of dramas, and a screenwriter. His novel The Book of Evidence was shortlisted for the Booker Prize and won the Guinness Peat Aviation award in 1989. His fourteenth novel, The Sea, won the Booker Prize in 2005.
He has also been awarded the Franz Kafka Prize (2011); the Irish PEN Award (2013); the Austrian State Prize for Literature (2013) and the Prince of Asturias Award (2014).
He has published a number of crime novels as Benjamin Black, most featuring Quirke, an Irish pathologist based in Dublin.
He was elected a Fellow of the Royal Society of Literature in 2007.

Paul Joyce (Author)
Paul Joyce's debut film, a unique co-operation with the playwright Samuel Beckett, and exhibitions which followed, established him internationally as a film-maker and photographer in the 1980s. He showed at the National Portrait Gallery, the Bibliotheque Nationale and the Witkin Gallery in New York and his documentaries have been nominated both for International Emmy and Cable Ace Awards. Paul as also published two collaborations with David Hockney and is currently Artist in Residence at Eastwell Manor, Kent.

GOR009077575
9781473619043
1473619041
Time Pieces: A Dublin Memoir by John Banville
John Banville
Used - Like New
Hardback
Hachette Books Ireland
2016-10-06
224
N/A
Book picture is for illustrative purposes only, actual binding, cover or edition may vary.
The book has been read, but looks new. The book cover has no visible wear, and the dust jacket is included if applicable. No missing or damaged pages, no tears, possible very minimal creasing, no underlining or highlighting of text, and no writing in the margins
Trustpilot