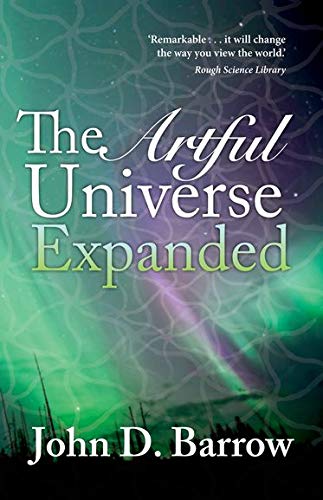 Out of Stock
$21.49
inc. GST
John D. Barrow looks at the relationship between the way our understanding of the universe reflects the ways in which evolution has shaped our brains, and our expression of that understanding in science, maths and art.
Very Good
Only 0 left

In The Artful Universe (OUP, 1995) John D. Barrow explored the close ties between our aesthetic appreciation and the basic nature of the Universe, challenging the commonly held view that our sense of beauty is entirely free and unfettered. It looked at some of the unexpected ways in which the structure of the Universe, its laws, its environments, and above all its underlying mathematical structure imprints itself on our thoughts, our aesthetic preferences, and our views about the nature of things. The exploration embraced topics such as perspective; the size of things and the origins of aesthetics; computer art (posing the question: is it art?); and the origins of our susceptibility to music. Life sales of the hardback totalled just over 25,000 copies. The study of the evolutionary and mathematical underpinnings of our aesthetic sense, and our understanding of the nature and scale of the universe has grown over the past decade, with developments in evolutionary psychology, and in cosmology. This paperback of the revised edition (OUP, 2005) contains eight new sections covering the recent discoveries of extrasolar planets, fashionable postmodernist rejection of science as uncovering objective reality, growing understanding of key ratios appearing in biological relationships, and studies of the underlying mathematical structure of a Pollock painting.

Review from previous edition an engaging book ... practically a universal education in both the history of modern science and the history of the Universe ... will be much quoted, much debated and much praised * Nature *
a feast: the kind of book which tells you everything you want to know about everything * The Economist *
I was infuriated by it, disagreed with it and loved reading it. * Timothy Ferris, New York Times Book Review *
in the speculative and intellectual richness of its pages, this book is probably unsurpassed * Peter Atkins *
a masterly exposition of what seems bound to become one of the most important developments to have taken place in physical science * TLS *
Intriguing analysis of new scientific thinking. * Sydney Times *
unique and wide-ranging book ... The reader is taken on an eclectic study of many scientific disciplines and is presented with a revealing picture of the structure of the physical world solely in terms of its invariant constants. There are also fascinating chapters on the definition and nature of life, the search for extra-terrestrial intelligence and the interpretation of quantum theory in relation to the existence of observers. * Europe & Astronomy 1992 *
..it is consistently diverting and illuminating and indeed, at its best, hard to put down in its communication of the excitement of seeing the world as an exercise in the mathematics of energy. Hugh Lawson-Tancred, The Spectator, on lBetween Inner Space and Outer Space
Barrow is emerging as the Stephen Jay Gould of the mathematical sciences. These fluent and erudite essays should further enhance his reputation. Professor Sir Martin Rees, Astronomer Royal, on Between Inner Space and Outer Space

About John Barrow (Professor of Mathematical Sciences, University of Cambridge)

Professor John D. Barrow, FRS, is Professor of Mathematical Sciences and Director of the Millenium Mathematics Project at the University of Cambridge. His principal area of scientific research is cosmology, and he is the author of many highly acclaimed books about the nature and significance of modern developments in physics, astronomy, and mathematics, including The Left Hand of Creation, The Anthropic Cosmological Principle, The Infinite Book: a short guide to the boundless, timeless and endless and most recently, 100 Essential Things You Didn't Know: Maths Explains Your World.