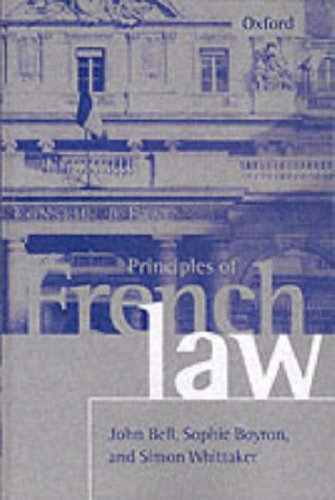 Used Price
$26.99
inc. GST
Free Shipping in Australia
Offering students and lawyers from a common law background an introduction to the French law and legal system, this text gives an explanation of the French institutions, concepts, and techniques, and provides the reader with a clear sense of the questions which French lawyers see as important.
Reviews:
Trustpilot
Very Good Well Read

Principles of French Law provides an account of the major features of French law for students and lawyers from a common law background. Offering a comprehensive introduction to the French law and legal system in terms which a common lawyer can understand, the authors give an explanation of the French institutions, concepts, and techniques, and provide the reader with a clear sense of the questions which French lawyers see as important and how they would answer them. The treatment of the material, both as to the French legal system and the substantive law, focuses where appropriate on the principles and values underlying the law, though the rules themselves are not neglected. Considerable use is made of the relevant French juristic literature and of examples from French case law. The book will be of use to students studying French law, at both undergraduate and graduate level, and as preliminary reading for students about to study law in France. It will be an initial point of reference for scholars embarking on a study of aspects of French law.

...to those who want a single book on French law, one can strongly recommend it... Tony Weir, Law Quarterly Review

John Bell is Professor of Public and Comparative Law at the University of Leeds. His publications include French Constitutional Law (1992), Cross on Statutory Interpretation 3rd edn (with Sir G. Engle, 1995), and French Administrative Law 5th edn (with Neville Brown, 1998).
Sophie Boyron is Lecturer in Law at the University of Birmingham.
Simon Whittaker is Fellow and Tutor in Law, St John's College, Oxford.

GOR001710389
Principles of French Law by John Bell
John Bell
Used - Very Good
Paperback
Oxford University Press
1998-06-04
578
0198763956
9780198763956
N/A
Book picture is for illustrative purposes only, actual binding, cover or edition may vary.
This is a used book - there is no escaping the fact it has been read by someone else and it will show signs of wear and previous use. Overall we expect it to be in very good condition, but if you are not entirely satisfied please get in touch with us.