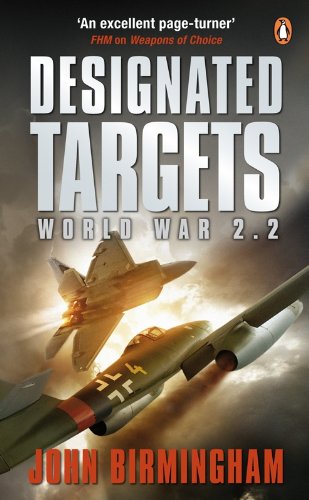 Used Price
$15.99
inc. GST
Free Shipping in Australia
The Second World War was turned on its head at the moment Admiral Kolhammer's ultra-modern stealth warships were hurled back through time from 2021. This title deals with this topic.
Very Good Good

The Second World War was turned on its head at the moment Admiral Kolhammer's ultra-modern stealth warships were hurled back through time from 2021. But no one could have predicted just how much of a nightmare would ensue . . .

Only months after the Transition, the great powers scramble to develop the weapons of tomorrow. The year 1942 is now a world of crude jet fighters, monstrous attack helicopters, and unholy dirty bombs - a mongrel technology, born decades prematurely.

Then, in a radical rewriting of history, Japanese forces sweep into Australia, foreign agents begin a campaign of terror in the USA, and Germany prepares for an all-out attack on Britain.

The twenty-first-century forces must resort to the most extreme measures yet and face a future rife with possibilities - all of them apocalyptic . . .

Picking up from where he left off with Weapons of Choice, John Birmingham shocks and awes us with this gripping second instalment in the Axis of Time trilogy.

Praise for Weapons of Choice:

'If there was a Booker for explosive alternative history techno-thrillers with guts and brains, it would be a cinch' Sydney Morning Herald

John Birmingham lives in Australia, and is the author of the cult classic He Died with a Falafel in His Hand and the award-winning history book Leviathan. Between writing books he contributes to a wide range of newspapers and magazines on topics as diverse as biotechnology and national security.

GOR001404160
Designated Targets: World War 2.2 by John Birmingham
John Birmingham
Used - Very Good
Paperback
Penguin Books Ltd
2007-12-06
608
0141029129
9780141029122
N/A
Book picture is for illustrative purposes only, actual binding, cover or edition may vary.
This is a used book - there is no escaping the fact it has been read by someone else and it will show signs of wear and previous use. Overall we expect it to be in very good condition, but if you are not entirely satisfied please get in touch with us.