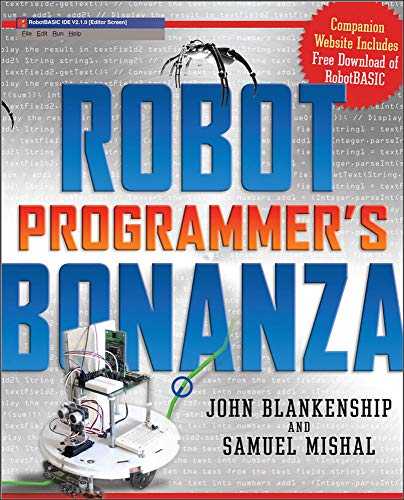 In Stock
$15.49
+10% GST
The essential robot resource for the NEW robotics hobbyists who want to learn how to program and control their robots rather than building them from the ground up.
Very Good
Only 1 left

Publisher's Note: Products purchased from Third Party sellers are not guaranteed by the publisher for quality, authenticity, or access to any online entitlements included with the product.

Get ready to reach into your programming toolbox and control a robot like never before! Robot Programmer's Bonanza is the one-stop guide for everyone from robot novices to advanced hobbyists who are ready to go beyond just building robots and start programming them to perform useful tasks.

Using the versatile RobotBASIC programming language, you'll discover how to prototype your creative ideas using the integrated mobile robot simulator and then port your finished programs to nearly any hardware/software configuration. You can even use the built-in wireless protocol to directly control real-world robots that can be built from readily available sensors and actuators. Start small by making your robot follow a line, hug a wall, and avoid drop-offs or restricted areas. Then, enable your robot to perform more sophisticated actions, such as locating a goal, sweeping the floor, or navigating a home or office. Packed with illustrations and plenty of inspiration, the unique Robot Programmer's Bonanza even helps you "teach" your robot to become intelligent and adapt to its behavior!

Everything you need to program and control a robot!

John Blankenship taught computer and electronic technology for 33 years at the college level. He has also worked as an engineer and as an independent consultant. He received a B.S. in electrical engineering from Virginia Tech, a masters in electronic engineering technology from Southern Polytechnic State University, and an M.B.A. from Georgia State University. This is his sixth book.

Samuel Mishal is a software engineer and systems analyst. He worked as a consultant for major government departments and businesses around the world. He taught mathematics and computing at the college level. He received a B.S. in electronics engineering technology from DeVry University, a bachelors in computer science from the University of Western Australia, a masters in engineering science from Oxford University, and a masters in structural engineering from Imperial College London.

GOR003203057
Robot Programmer's Bonanza by John Blankenship
John Blankenship
Used - Very Good
Paperback
McGraw-Hill Education - Europe
2008-06-01
396
0071547975
9780071547970
N/A
Book picture is for illustrative purposes only, actual binding, cover or edition may vary.
This is a used book - there is no escaping the fact it has been read by someone else and it will show signs of wear and previous use. Overall we expect it to be in very good condition, but if you are not entirely satisfied please get in touch with us.