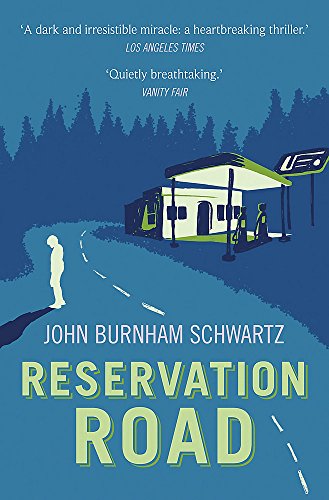 At the close of a beautiful summer day near the quiet Connecticut town where they live, the Learner family - Ethan and Grace, their children, Josh and Emma - stop at a gas station on their way home from a concert. Josh Learner, lost in a ten-year-old's private world, is standing at the edge of the road when a car comes racing around the bend. He is hit and instantly killed. The car speeds away.

From this moment forward, Reservation Road becomes a harrowing countdown to the confrontation between two very different men. The hit-and-run driver is a small-town lawyer named Dwight Arno, a man in desperate need of a second chance. Dwight is also the father of a ten-year-old boy, who was asleep in the car the night Josh Learner was killed.

In a gripping narrative woven from the voices of Ethan, Dwight, and Grace, Reservation Road tells the story of two ordinary families facing an extraordinary crisis--a book that reads like a thriller but opens up a world rich with psychological nuance and emotional wisdom. Reservation Road explores the terrain of grief even as it astonishes with unexpected redemption: powerful and wrenching and impossible to put down.

A triumph...character-driven as it is, it reads like a thriller, swift and complete. * The New York Times Book Review *
A poignant thriller...the novel's resolution is quietly breathtaking. * Vanity Fair *
Haunting .... A powerful and affecting novel. * The New York Times *
A dark and irresistible miracle: a heartbreaking thriller. * Los Angeles Times *
A deeply moving, darkly satisfying novel. * The Boston Globe *
So beautifully written and compelling that you can't will yourself to put it down. * The Denver Post *
Thrums with suspense and moral ambiguity...This is one of those rare-very rare-novels that you don't so much read a inhabit and that makes everyday life seem altogether mysterious. * Entertainment Weekly *
This book possesses a conclusion of such power that it would be a literary crime to reveal it. * USA Today *
[Schwartz is] a fine writer....Reservation Road is a page-turner, but along the way there is much to linger over. * The Washington Post Book World *
The redemption in Reservation Road is unexpected, compassionate and powerful, making it moving in a way that few novels are. * San Antonio Express-News *
Reservation Road is a terrific novel, both a page-turner and a discerning portrayal of the psychic costs of self-delusion. * The Oregonian *

John Burnham Schwartz is the author of the acclaimed novels The Commoner, Claire Marvel, Bicycle Days and Reservation Road, which was made into a film based on his screenplay.His books have been translated into more than twenty languages.He lives in Brooklyn, New York, with his wife and son.

GOR003953535
Reservation Road by John Burnham Schwartz
John Burnham Schwartz
Used - Very Good
Paperback
Little, Brown Book Group
2005-12-20
304
1780334583
9781780334585
N/A
Book picture is for illustrative purposes only, actual binding, cover or edition may vary.
This is a used book - there is no escaping the fact it has been read by someone else and it will show signs of wear and previous use. Overall we expect it to be in very good condition, but if you are not entirely satisfied please get in touch with us.