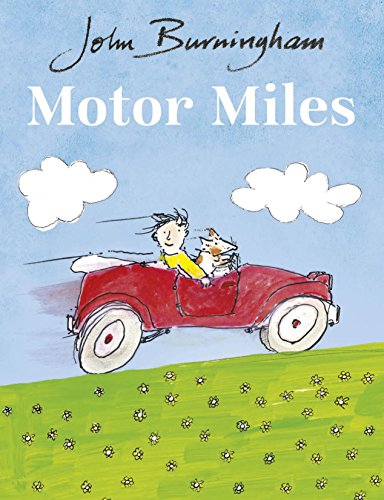 Used Price
$11.99
inc. GST
Free Shipping in Australia
John's distinctive, expressive artwork is stunning, whether it's his instantly recognisable characters or the expansive, contemplative spreads of colour, as Miles discovers the joys of the road.
Reviews:
Trustpilot
Very Good Good

Miles is a very difficult dog... Until he is given his very own motor car and learns to love the open road! This enigmatic story is a joy to read, gently exploring the transformational power of freedom. John's distinctive, expressive artwork is stunning, whether it's his instantly recognisable characters or the expansive, contemplative spreads of colour, as Miles discovers the joys of the road. This is a story that children will immediately engage with, while parents absorb the magically nostalgic air and subtle celebration of change and growing up.

"John Burningham, who has brought us so many memorable picture-book characters since Borka the goose with no feathers arrived in 1963, now introduces Miles, who is "a very difficult dog". Characteristically for Burningham - and this is an important lesson for children - misbehaviour does not mean forfeiting affection. Instead, Alice Trudge and her son Norman, who own Miles, find what he really likes to do, which is to go out in the car. Taking him daily is time-consuming, so a neighbour builds him his own car and Miles learns to drive. He takes Norman to school, and the two have joyous secret outings. With his wavering, fragmented line and beautiful washes of colour, Burningham expresses character and comedy, and depicts landscapes through the seasons that are magical and seductive. Everything about this picture book suggests freedom, in the style and the story. The tale is simple but encompasses kindness to animals, neighbourliness, the advantages of being practical and handy, the rewards of diligently learning a skill, a love of the outdoors, the pleasure of companionship, following your own inclinations and knowing left from right. There is a fun punchline too. The book might look sketchy, but it is just right." -- Nicolette Jones * Sunday Times *
"October 2016 Book of the Month There's a perfect simplicity to this book, the work of a picture book genius. Miles is a difficult dog, won't come when called, doesn't like walks or other dogs, barks too much. The only thing he does like, in fact, is going out in the car. Fortunately, the family's neighbour realises that what Miles needs is a car of his own, and offers to make him one. John Burningham's illustrations, simultaneously comic and serious, match his deadpan text beautifully; Miles and his young owner Norman are wonderfully realised characters; the colours glow: quite simply wonderful." -- Andrea Reece, Lovereading4Kids * http://www.lovereading4kids.co.uk/book/13204/Motor-Miles-by-John-Burningham.html *

GOR008989102
Motor Miles by John Burningham
John Burningham
Used - Very Good
Paperback
Random House Children's Publishers UK
2017-06-01
32
1782955550
9781782955559
N/A
Book picture is for illustrative purposes only, actual binding, cover or edition may vary.
This is a used book - there is no escaping the fact it has been read by someone else and it will show signs of wear and previous use. Overall we expect it to be in very good condition, but if you are not entirely satisfied please get in touch with us.