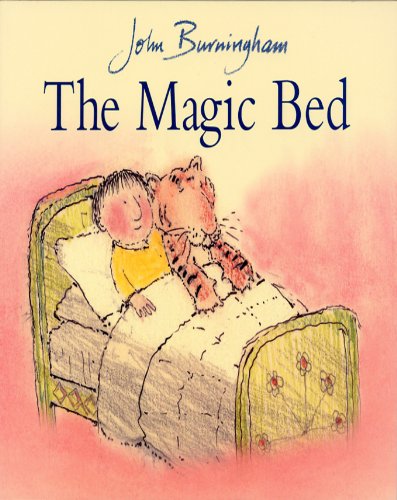 The Magic Bed
by John Burningham

In Stock
$17.49
inc. GST
Georgie has got a new bed, but it's not like other beds. For each night, Georgie says the magic word and it whisks him away on a fantastic adventure. He loves his bed, but one day he and his family go on holiday, and when they come back, Granny has a big surprise for Georgie . . .
Very Good Good Well Read
7 in stock

The Magic Bed by John Burningham

Georgie has got a new bed, but it's not like other beds. For each night, Georgie says the magic word and it whisks him away on a fantastic adventure. He loves his bed, but one day he and his family go on holiday, and when they come back, Granny has a big surprise for Georgie ...

"Burningham's a dab hand at leaving a story hanging in mid-air, and, a s ever, this moving and poetic hymn to the power of imagination invites and rewards any amount of personal interpretation" -- Joanna Carey * Guardian *
"The book has its moments of suspense and an engagingly suggestive ending, but best of all is the succinct, expressive, sketchy style, which communicates emotions, characters, settings and atmosphere with great precision" -- Nicolette Jones * The Sunday Times *
"Burningham's story taps into the limitless realm of a child's imagination. It's a classic tale from one of the best around" -- Damian Kelleher * Metro Life *
"The story has a strong appeal because it is a fantasy that is true to reality: everyone has a kind of magic bed" -- Jane Doonan * TES *
"An ideal showcast for what Burningham does best: blending domestic detail with expressionistic emotion and scale" -- Sally Williams * Independent *

GOR001220226
The Magic Bed by John Burningham
John Burningham
Used - Very Good
Paperback
Random House Children's Publishers UK
2004-03-04
40
0099439697
9780099439691
N/A
Book picture is for illustrative purposes only, actual binding, cover or edition may vary.
This is a used book - there is no escaping the fact it has been read by someone else and it will show signs of wear and previous use. Overall we expect it to be in very good condition, but if you are not entirely satisfied please get in touch with us.