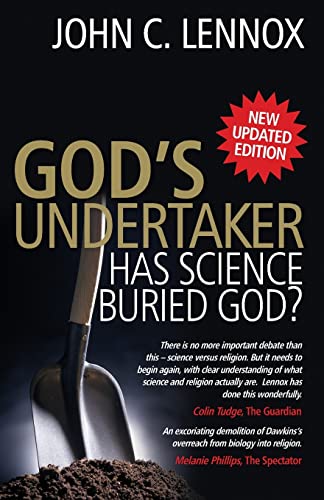 In Stock
$17.49
inc. GST
A new, updated edition of John Lennox's successful book, including a foreword by Francis Collins, Director of the Human Genome Project
Like New Very Good
Only 3 left

Evaluates the evidence of modern science in relation to the debate between the atheistic and theistic interpretations of the universe, and provides a fresh basis for discussion. The book has grown out of the author's lengthy experience of lecturing and debating on this subject in the UK, USA, Germany and Russia, and has been written in response to endless requests for the argumentation in written form. Chapters: War of the worldviews The scope and limits of science Gods, gaps and goblins Designer universe Designer biosphere The nature and scope of evolution The origin of life The genetic code and its origin Matters of information Taming chance without intelligence The origin of information

A brilliantly argued re-evaluation of the relation of science and religion, casting welcome new light on today's major debates. A must-read for all reflecting on the greatest questions of life. --Alister McGrath, author, Glimpsing the Face of God
Recent books touting atheism have been grounded more on dyspepsia than on dispassionate reason. In this book John considers the best, most recent science from physics and biology, and demonstrates that the picture looks far different from what we've been told. --Michael Behe, author, Darwin's Black Box and The Edge of Evolution

John Lennox is Professor of Mathematics at the University of Oxford and Fellow in Mathematics and Philosophy of Science at Green Templeton College. He lectures on Faith and Science for the Oxford Centre for Christian Apologetics. He has lectured in many universities around the world, including Austria and the former Soviet Union. He is particularly interested in the interface of Science, Philosophy and Theology. Lennox has been part of numerous public debates defending the Christian faith. He debated Richard Dawkins on "The God Delusion" in the University of Alabama (2007) and on "Has Science buried God?" in the Oxford Museum of Natural History (2008). He has also debated Christopher Hitchens on the New Atheism (Edinburgh Festival, 2008) and the question of "Is God Great?" (Samford University, 2010), as well as Peter Singer on the topic of "Is there a God?" (Melbourne, 2011). John is the author of a number of books on the relations of science, religion and ethics. He and his wife Sally live near Oxford.

GOR008178296
God's Undertaker: Has science buried God? by John C. Lennox
John C. Lennox
Used - Like New
Paperback
Lion Hudson Ltd
2009-02-20
224
0745953719
9780745953717
N/A
Book picture is for illustrative purposes only, actual binding, cover or edition may vary.
The book has been read, but looks new. The book cover has no visible wear, and the dust jacket is included if applicable. No missing or damaged pages, no tears, possible very minimal creasing, no underlining or highlighting of text, and no writing in the margins.